What really happened on April 10, 2010 in Smolensk? Final Report from 4 Smolensk Conferences is available online. 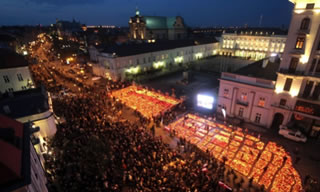 Niezalezna.pl presents a document entitled “What do we know about the Smolensk crash? The preliminary summary of the Smolensk Conferences.” This document presents a coherent opinion of the Smolensk Conferences’ Scientific Committee and demonstrates how the crash really occurred. When examined in whole and in detail, the documentation concludes that the basic rules of physics were violated in the version of the crash presented in the MAK’s and Miller Commission’s reports. It is obvious that Tu-154 was blown-up and did not crush.

The Fourth Smolensk Conference took place on November 14, 2015 in Warsaw. Its goal was to summarize all the research completed so far, in order to present it in an easily comprehensible way. This document presents the coherent position of the Smolensk Conferences’ Scientific Committee and demonstrates what really happened on April 10, 2010.

This preliminary summary document can be found on Smolensk Crash News Digest.

The scientific achievement of the three Smolensk Conferences, organized subsequently in 2012, 2013 and 2014, includes the results of the in-depth research from all disciplines of science represented by the Scientific Committee. These disciplines include mainly technical fields essential for the investigation of the airplane crash, but also the non-technical disciplines, such as medicine, sociology and law.

The Smolensk Conferences allowed a thorough examination of all available information and evidence regarding the Smolensk crash.

As a rule, experts from disciplines of science that are not represented within a team investigating a crash, assist the team in its investigation. During the Smolensk Conferences, experts from various fields of science were represented in all Committees. In particular in the Scientific Committee as well as the Inspirational and Advisory Committees came from all disciplines of science essential in the crash investigation. Such scientific versatility within the Committees, as well as the comprehensiveness of the presented research – 78 reports of all scientific disciplines mentioned earlier were presented during the Conferences – allowed a complex examination of available information and evidence. The key conclusion from all the Smolensk Conferences is that all reports presented were consistent with each other. All research presented within the disciplines of geodesy, geotechnics, archaeology, medicine, physics, chemistry, mechanics, aerodynamics, electrotechnology and acoustics build a coherent picture of what happened and lead to the following conclusions:

1. The MAK/Miller’s hypothesis is false, because all of its five stages contradict the basic rules of physics, as well as the indisputable evidence.

2. The Smolensk crash is a perfect example of what the worldwide literature refers to as controlled demolition. It occurred due to series of explosions within confined areas of the aircraft, which were inaccessible to pyrotechnical inspection. Basic information on technologies used for controlled demolition was presented in one of the annexes.

3. The Russian team in control of the Smolensk crash site ensured that the MAK/ Miller’s hypothesis was authenticated by transferring some of the aircraft’s remains to designated areas, and by concealing evidence contradictive to the hypothesis.

4. Although the general cause of the Smolensk crash is known and could have been established on the basis of sparse evidence available for independent research, it is obvious that the Smolensk crash investigation cannot be concluded without analysing the key evidence, such as the wreckage of the plane and human remains. Without examining this direct evidence, it is impossible to establish significant details.