The TVN employees took part in a political provocation 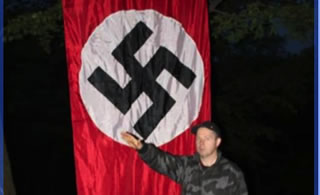 "Political speech is for the lies to sound true, for stupid faces to look respectable, and the wind to have the appearance of solid matter," Orwell mocked. What was the television network TVN doing? The same; the neo-Nazi spectacle from the forest near Wodzisław went into the world as a truth exposed about us, the Poles, while "stupid faces" who participated in this masquerade on behalf of TVN were even awarded the prize for... "reportage."

Let us say openly that the "glorifying" participants, both those paid and those recording and reporting on a pre-arranged birthday celebration of Hitler, a TVN camera operator and a young adept of journalistic profession, had to be well aware that they were executors of a nasty political provocation. All the more repugnant that it casts a long shadow not only on the PiS government, which is framed to supposedly foster rebirth in Nazism in Poland, but on the entire nation, which suffered under the German Nazi occupation like no other.

Recently revealed details about the circumstances of this mystification are shocking. However, this set-up is even not the most shocking, nor is the loss of good name that our country and we all together suffered as a result of it, and not even the result of this provocation alone. Working every day in sweat on discrediting our country is no one else but our own so-called total opposition. The most eloquent and unpleasant example of their indirect participation in this betrayal was the speech by the “Shadow Prime Minister” Grzegorz Schetyna (PO chief) given at the Congress of the European People's Party in ... Helsinki, even before the centennial celebrations with the Independence March began: "This is the march of nationalists", which "is sanctioned by President Duda who will lead it." This will be “a march of shame and disgrace."

Both TVN's "reportage" from the forest Hitler heiling provocation as well as Schetyna's words and all other similar actions and statements have already gone into the world; No one will erase them with any rubber eraser; they will not be reversed by any corrections. In the minds of recipients there will remain such pictures as from pro-hitlerian night fete, like Italian neo-Nazis, as if from a march in Poland, or Germans with shaved heads or tattooed swastikas, used as ... illustrations of the situation in our country. Damage and consequences are irreparable.

This nightmare of throwing dirt at us outside our borders began de facto after the first PiS electoral victory, when less than a year later, exactly in July 2006, with the support of the eminent head of Polish diplomacy Bronisław Geremek, the European Parliament passed a resolution condemning our country for xenophobia, racism, anti-Semitism, homophobia, etc., and even recommended observation of Poland by the European Monitoring Center on Racism and Xenophobia. The country, where as in no other, the heads of diplomacy in the last 20 years were politicians of Jewish origin: Stefan Meller, Adam Rotfeld and Bronisław Geremek, as noted by former foreign minister Władysław Bartoszewski,

It is difficult for us to prove that we are not a camel. In contrast to the lampoon "reporting" of the multilingual media from the march, our rebuttal - though necessary - has no firepower. The reorganization of the media market in Poland, which is postponed to infinity, takes on greater significance. Apparently, the appropriate projects of media "deconcentration" stays in the ministerial drawers. I do not know what the Law and Justice is waiting for, because it is impossible to have a worse image in the eyes of our critics in the country and abroad than what is going on right now. Of course, they will raise the squeak and make noise if we touch the companies we are talking about. Of course they will make a noise when we will introduce such order as for example, France or Germany have... When, to put it bluntly, hostile, foreign, dominant influences will be eliminated from our country. I have repeatedly written about the scale of this domination, but not only me. Almost one hundred percent of regional press, the largest weekly, the largest tabloid, etc., remain under foreign control. The squeak was everywhere where this problem had been dealt with, but no one remembers it today, because only an idiot could be surprised that one does not allow hostile foreign interests to control their own country.

Let me repeat once again, the damages to our image so far incurred and their effects are irreparable. The more so because this discrediting cannonade continues, and before the elections it will get even stronger, although it is even difficult to imagine it. The time works to the detriment of the power that is being constantly undermined, regardless of who it would be and to whom it would belong.

Today elections are decided mainly by the media. Accordingly, there are two options: media deconcentration (a term used as a substitute for repolonization, i.e. limiting the share of foreign capital in the media) will be implemented right now, although it will be three years too late. Fulfilling this electoral promise three years ago - just at the beginning of the term - would avoid many of today's PiS problems. Or it will be implemented right after parliamentary elections in 2019. In the latter case, however, one should take into account the real threat of a Pyrrhic victory because of the discrediting function of the Polish-language media controlled by foreign interests and the ultimate abandonment of their return to Polish hands. Anyway, the milk has been spilled. Complaining out it is like lamenting over today's revelation regarding TVN provocation with Hitler birthday masquerade in the forest near Wodzisław ...

The people from the forest party have never participated in similar masquerades before. They did not organize Hitler's birthdays before. So what made them decide to do so? How did they contact TVN journalist Sobolewska? It was established that Sobolewska contacted one of them named Mateusz S. by e-mail. Is it true that the people who gave the money to Mateusz S. to organize this masquerade made it conditional on inviting the TVN reporter for this Hitler birthday party in the forest? Mateusz S. testified so in front of the prosecutor, and the study with a polygraph did not challenge his words. The polygraph study focuses not on the receipt of money by Mateusz S. in the spring 2017, but rather on the circumstances that apply to the handover itself. Mateusz S.'s testimony sheds new light on the whole matter.

Another person convicted together w Mateusz S. testified that TVN cameraman PIotr Wacowski "poured alcohol into him" and tried to incite him into criminal activities directed against the immigrants. Both TVN journalist Anna Sobolewska and TVN cameraman Piotr Wacowski appear on the photos taken at the end of this staged event with swastika and Hitler's portrait in the background.

Another issue is the reward given to the authors of this fake reportage by Radio Zet. This also raises serious questions. Is this an attempt to legitimize this report and the entire masquarade in order to portray the Polish poeple to the outside world as fascists? Does this type of "journalistic reporting" follows the Goebels-style staged provocations pattern that led to war of agression on Poland and outbreak of WWII?