Questions about the role of TVN in Hitler's birthday grow. 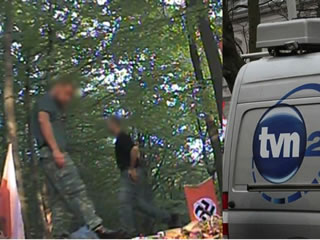 As the prosecutor's letter sent to the Press Freedom Monitoring Center reveals, the TVN broadcasting group is unable to locate the original video recording from the infamous Hitler’s Birthday reportage broadcasted by TVN on January 20, 2018. What's more, the TVN operator who videotaped this event provoked participants to xenophobic behavior.

In the letter published by wpolityce.pl, the prosecutor writes that the party in the forest near Wodzisław involved heavy drinking. “They especially watered me,” one of the participants of the "birthday party" testified. The prosecutor's office also states that the TVN camera operator was to provoke other people to make statements "of xenophobic and racist nature, and even violence."

Furthermore, one of the witnesses testified that the TVN operator incited the participants to "organize some action" against the refugees, so that they would "be afraid." He was supposed to say: “You have to do something with refugees, because there are too many of these ‘ciapaki’ (clumsy)” - he was to say.

Based on the evidence in the form of testimonies of witnesses as well as recordings broadcast by TVN, "the journalist and television operator participating in the meeting played a specific role in this event," stated the prosecutor's office. The TVN operator "raised a hand in the Nazi greetings," posed for photos against the background of Nazi emblems, provoke participants to xenophobic and racist statements, and even to violence. According to the prosecutor's office, the TVN operator was also supposed to take an active part in erecting Nazi decorations for this event, including the swastika symbol.

The TVN material about alleged Polish neo-Nazis aroused great interest worldwide and brought the team of TVN reporters, among others, an Award of Radio ZET in the amount of 50 thousand zł. Recently, however, new facts came to light. It has been proven that the organizers were well paid to put together this event by unknown sources. Allegations have been raised that this reportage was a "provocation" staged by TVN, and that the 128th birthday of Adolf Hitler was a fake news arranged for political purposes by TVN to frame and discredit Poland worldwide by portraying it as a fascist country.