Some Leaders of European Parliament and journalists were involved in the attempt to overthrow the Polish government. 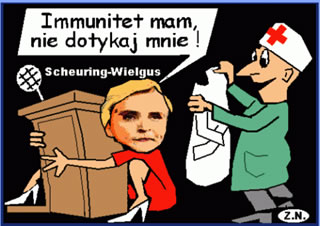 Sejm Speaker Marek Kuchciński released shocking information about December 16, 2016 attempt to overthrow the government of Prime Minister Szydło by a part of the opposition. He said that the December opposition attacks were coordinated with journalists and Members of the European Parliament (MEP). This information came from Tomasz Poreba, MEP.

The Tweet from Poreba read: Rzeszow. Deputy @TomaszPoreba attempt to overthrow the government was coordinated with journalists and Members of the European Parliament.

The statement of Marshal Kuchciński is below: 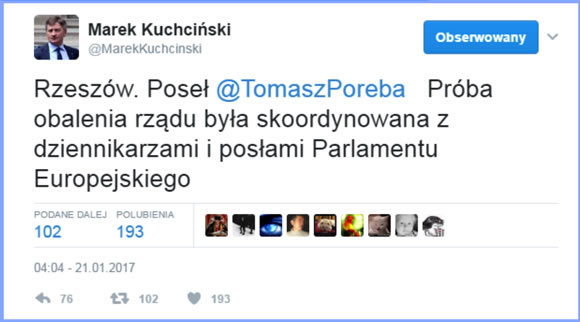 Furthermore, the Niezalezna.pl portal reports that the former Prime Minister of Poland and current President of the European Council Donald Tusk was also involve in actions of the opposition to overthrow the government of Prime Minister Szydlo. On December 17, 2016, the President of the European Council took part in the ceremony concluding the 2016 European Capital of Culture in Wrocław.

He used this occasion to attack the ruling party and support the anti-government rebellion - writes the niezalezna.pl portal.
Referring to the information received from the EU politicians, the portal wrote that "the visit and speech of Tusk in the culminating moments of the attempted coup d’état struggle were not accidental."

Our sources claim that Tusk was to play a key role in an attempt to overthrow the government. Appearing as "the EU Governor” who enters the scene to calm the situation in the country. The calculation was that there would be violent riots involving the police and security services. It's around him that the opposition was to coalesce - niezalezna.pl reports.

This failed attempt to overthrow the government of Prime Minister Szydlo on December 16-17, 2016, was portrayed in the documentary "Pucz", which can be viewed here: https://www.youtube.com/watch?v=bqE3ODfNvzs

Memory is unreliable but the things that have recently happened must not be forgotten, because more such dangerous violent attempts to overthrow democratically elected governments by desperate losing elites may follow. Therefore, we all should watch the documentary "pucz."