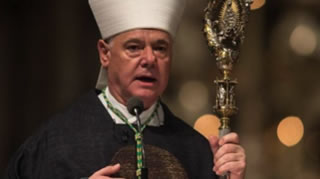 As Cardinal Gerhard Mueller who serves as the prefect of the Congregation for the Doctrine of the Faith said, Christianity is not an irrational religion, interested only in its followers, but it is universal.

"No nation can be a teacher of others in Europe. No European institution can impose its values ​​on others,"

According to Cardinal Mueller, the denial of all the principles that lay at the foundation of Europe is due to Marxist ideology. That is why - as he stressed - there is an ongoing attack on countries that are seeking re-Christianization of the continent

"First, they wanted to destroy Catholic Ireland in this way, now Poland is in the center of interest of these circles,"

In his opinion, this happens by, inter alia, "teaching Poland about the principles of democracy."

"Poland is the country in Europe that has done the most for democracy, for freedom, for the self-determination of the nation, for the dignity of the human person. In its history, Poland suffered the most and fought the most,"

Cardinal Mueller recalled the period of the partitions when Poland was divided between the three invaders.

"So Poland was divided, there were partitions, but the Polish soul was not attacked. Today's attack on Poland is worse, because then only the body was torn apart. Today it is a deadly blow to be inflicted on the Polish soul. The inner coordinates of Christian Poland are to be destroyed,"

According to the Cardinal, the best example of an attack on the Polish soul is the film by Wojciech Smarzowski "Kler." As he noted, the director is not showing the drama of individual priests, but is interested in "the defamation of the entire Catholic Poland."
Just as once the magnates with the help of Prussian and Russian money betrayed Poland, now there are Poles who want to destroy the inner identity of the Polish people. How to do it? To arouse distrust of others (...) We know it from the past - in Nazi Germany there were such films produced - those evil Poles, these evil Jews, those evil Russians. It causes resentment, reluctance towards others, stereotypes, and led to hate campaign,

Whereas, according to Cardinal Mueller - it was the clergy that caused Poland not to be destroyed spiritually and intellectually during the challenging times of the partitions, World War II and communism.

If I were Donald Tusk and had something to say in Europe, instead of instructing Poland, I would teach everyone in the European Parliament one word in Polish: "thank you". Thank you for what Poland has done in Europe,

As he explained, there is an ongoing attack not only on Poland but on the entire Catholic Church.

"Poland is to serve as an example of how to destroy Christianity through terror,"

As he noted, often people who come to Poland from the West tell Poles: "You are medieval, backward."

"Do not listen to them. Be aware of your identity, fight as soldiers of the Home Army against tyrants, just like the miners from the coal mine "Uncle" (...). We represent the culture of life, based on the Resurrection, opposing hatred and that which is hideous,"
- said Cardinal Mueller.

According to the moderator of the Europa Chrisiti Movement, Fr. Ireneusz Skubis, "something bad" is happening with Europe.

"There are a thousand churches in the Netherlands to sell. This is happening all over Europe. These are very disturbing signs. There are such municipalities in Denmark, where Muslims do not allow a Christmas tree on the Christmas market. And Movement “Europe Christi” wants Europe to celebrated Christmas - let Europe remain Europe of Christ!"

He admitted that there are still parties in European politics that refer to Christianity. However, he said, these parties "betrayed Christ" because wherever they govern, abortion, euthanasia and homosexual marriages are legal.

Ks. Skubiś remarked that gender ideology is very much present in the thinking of European elites.

"In African countries, gender ministries are appointed and it is a condition for these countries to receive money and grants,"

In his opinion, "the identity of Europe is unstable."

"And yet the culture of Europe has Christian roots. It was shaped by the philosophy and wisdom of the Greeks, by Roman law, but above all – by the Gospel of Jesus Christ and the Decalogue,"

Prime Minister Mateusz Morawiecki sent a letter to the participants of the Congress. He pointed out that this year's Congress is taking place during the celebrations of two important anniversaries: the 100th anniversary of Poland regaining its independence, and the 40th anniversary of the election of Pope John Paul II.

"Poland, bringing to the European Union an important set of values ​​and traditions, and a specific vision of economic and social development. Poland wants to be an advocate of good change today and participate in decision-making processes in Europe in a meaningful way. The reflection of this trend that necessitates Europe's return to its Christian foundation here in the Polish parliament (...) has a symbolic and significant meaning. It is impossible to understand Europe without acknowledging its Christian roots."

According to the Prime Minister, the central place of the human person, the role of the family in society, the rights of the individual and social groups, and moral and ethical values ​​- all this set of values developed in the context of the Gospel.

"Re-Christianizing Europe as a return to its proper Christian foundation is a special challenge (...) Today, when the future of the new European project is being weighed, Poland is part of a search for a constructive program for the European community. The program calling for respect for the national identities of the Member States,"

"Europa Christi" is a movement created in March 2017 at the initiative of father Irenausz Skubis, an honorary editor-in-chief of the Catholic weekly 'Niedziela.' Its main purpose is to rebuild Christian thinking about Europe. The first Congress of the Europa Christi Movement took place in October 2017 in Częstochowa, Łódź and Warsaw.

On January 22, 2019, a prestigious American Foreign Policy Magazine proudly announced a list of 100 most influential “Global Thinkers.” Among those selected in the Economic and Business category, the fifth place was awarded to Donald Tusk, President of the European Council, a former Polish Prime Minister, for “increasingly confront(ing) his home nation,” and “defending European values of integration against rising nationalism.”