The history proved us right, said Joanna and Andrzej Gwiazda in their new book 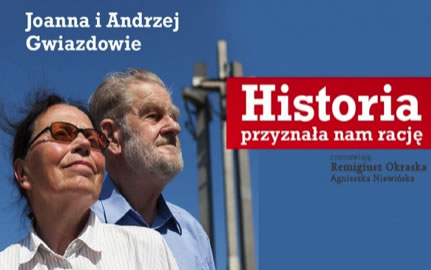 In Kraków, the enthusiastic crowd carried Wałęsa on their shoulders to the Market Square, where he took the oath, as Kościuszko once did. There are many photos capturing this historic moment of great importance. Today, these photos played a key role in identifying those who carried Wałęsa on their shoulders that day. Over time we have learned that they all turned out to be tajni współpracownicy (TW), the so-called secret communist collaborators (or simply put – snitches).

Joanna and Andrzej Gwiazda never made any ambiguous compromises. They speak openly on subjects that other people are afraid to touch. Although their names have been consistently wiped out from collective memory in Poland, they remain faithful to their ideals, to each other, and to the truth.

A book entitled Years later, the history proved them right in a form of an interview by Remigiusz Okraska and Agnieszka Niewińska with the two leading Solidarity activists is an engrossing and very personal story of Joanna and Andrzej Gwiazda, the organizers of the August 1980 Solidarity strike in the Gdansk Shipyard and the co-founders of the Solidarity Movement in Poland.

There is no other book where so much information can be found about the people who devoted their entire lives to the cause of independent Poland, and whose very existence was consistently wiped out from the national consciousness. Thanks to Joanna and Andrzej Gwiazda we are now able to rediscover this fascinating and forgotten story of the Solidarity Movement. This important rediscovery of the Solidarity Movement history comes after years of Jacek Kuroń and Adam Michnik’s zealous promotion of “the only correct version of protests” in the Polish People’s Republic, - comments Sławomir Cenckiewicz, Historian.

The price we paid for our commitment to the ideals of the Solidarity Movement was the lack of any private or family life. We carried out the opposition activity on top of our jobs, thus we had no time for anything else. No time for cultural and social life, or even just to rest… Sometimes Andrzej got no sleep. Our entire life together evolved around our activities. We lost old friends and all we talked about with new ones was our opposition struggle. We survived these difficult times probably thanks to our sense of humor, - says Joanna Gwiazda.

We were very skilled at escaping the pursuit and confusing the chase. Sometimes it was even in the woods at night. We managed to annoy our opponents so much, that they ended up using night-vision devices and keeping their car lights switched off when following us in the woods. The first time it happened, we were very impressed. All we could

hear was an accelerating car, but we could see anything…” - recalls Andrzej Gwiazda

Our readers who speak Polish can purchase the "Years later " at: http://xlm.pl/ksiazka/historia-przyznala-nam-racje-joanna-iandrzej-gwiazdowie.