The Wawel protests are beyond civil.

“The way Jarosław Kaczyński is being attacked
crosses the line,” says Elżbieta Jakubiak 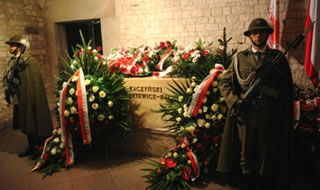 “I understand that the media thrive off headlines such as ‘Nation protesting,’ but the protests at Wawel have become wild to the point where it cannot be tolerated,” Elżbieta Jakubiak, the former head of late President Kaczyński’s Bureau.

wPolityce.pl: What is your view of continuous demonstrations by a group calling itself the “Citizens of Poland,” which – supported by some media – disturbs the Smolensk monthly commemoration events and even obstructs Jarosław Kaczyński’s visits to Wawel to pray at his brother’s grave?

Elżbieta Jakubiak: I view such actions as beyond civil and appropriate. The police should intervene in this matter.

A political dispute is one matter, but what happened in the Sejm is another. Immunities and regulations govern the Parliament, and although there are disputes whether law was breached, it is all within the framework of political dispute.

Whereas the actions by the so-called “Citizens for Poland” – as it is hard to really view them as citizens due to their lack of respect for citizen’s rights, including Jarosław Kaczyński’s right to visit the grave of his brother – are simply beyond any norms. The way they attack Jarosław Kaczyński is beyond any limits. It started a long time ago and escalated after the Smolensk crash. The Smolensk tragedy seems to provoke such hatred in some people, it is hard to believe they actually live in Poland. I value the Polish tradition, the way the Polish people are raised when it comes to issues such as privacy at the cemetery, respect for death and funeral.

We have to object those actions the same way we would object to interruptions during a mass, no matter of what religion. We should all be ashamed of the audacity with which Catholics are insulted. I can’t imagine the same people to enter a cemetery of another religion, or a mosque. Here they would not have the courage to do so.

If I were Jarosław Kaczyński, I would demand that the police took action.

I see, but the “Citizens of Poland” don’t hide that this is precisely what they want, so that it will look like innocent protesters fall victims to pacification of the oppressive government.

Yes, there is a threat that it will look like that. We all fear that a reaction would go out of control, and an incident will put authorities in a bad light. It could turn out that nobody knows whether they entered Wawel, or were just standing outside it. They could event go to Brussels and claim the entire event happened somewhere in Kraków, without any mention that it happened at the grave of the late President, and that they were attacking the President’s brother.

I have no doubt that their actions are calculated and they wait for a strong reaction. A proverb tells us not to argue with stupid people, but these people are not stupid. Their actions are deliberate, and repeated over a long period of time. I remember when a large banner appeared opposite Wawel, advertising a beer “cold Lech.” My husband wrote to the Lech manufacturer, saying that he expected more from such a large brand than playing on words and such emotions. The brand denied any deliberate action, but it was then when the crossing of the line began.

Why do you think the media is fascinated with this kind of actions? They were excited about Taras, and now about the “Citizens of Poland.” It seems that serious media are delighted and happily promote these kind of initiatives.

Yes, these are serious media, managed by serious people, and some of those people realize that they go too far, crossing the line of culture and tradition.

I would expect the Church to take a stance on that – because there is a line that cannot be crossed in the public life. Representatives of the church hierarchy who can deal with the other side, such as Nycz and Dziwisz should speak up, before these mobs invade the masses, family events and funeral commemoration services.

The situation would be out of control.

I also did not like the way people behaved at the meeting with Grzegorz Schetyna. A physical assault at the former Marshal of the Sejm and the opposition politician is something we strongly disapprove of. We can have a heated discussion, but it cannot become physical.

We are not faultless, enough to mention the booing at Powązki. I remember when Bogdan Borusewicz was whistled and booed at. President Lech Kaczyński reacted and called for silence, which was very significant. We need someone to step in and say clearly and loudly that such conduct will not be tolerated. I expect that people with authority and those managing media important for all Polish people will step up to the plate.

I am aware that the media thrive off headlines such as ‘Nation protesting,’ but the protests at Wawel have become mad to the point where it cannot be tolerated.