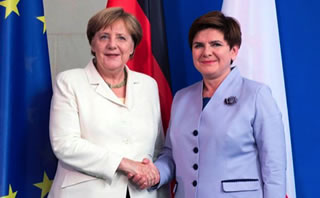 Recently Chancellor Angela Merkel visited Poland, where she met with President A. Duda, Prime Minister B. Szydło and PiS Chairman J. Kaczynski. After Szydło-Merkel meeting on February 7, 2017, Chancellor Merkel admitted that she was aware of negative political impact of the Nord Stream 2 pipeline.

“We are interested in helping migrants. We have already allocated millions of dollars from the national budget for this purpose,” he said. The Government spokesman further commented on the EU’s position with respect to helping refugees. “For us, Poles, the most important thing is that the EU has begun to shift its perspective and see things as we had explained to them, as the Prime Minister said. We were criticized for this (perspective) by the Civil Platform and Polish People’s Party,” he said.

Bochenek emphasized that the Polish government aids and intends to continue to provide aid to refugees in the Middle East. However, the aid is to be given outside of Polish borders.

“We have been providing aid for many months now,” said the government spokesman. “We have already allocated 46 million from the state budget,” he added.

He also mentioned aid to the Syrian families, on which the Polish government has already spent large sums of money, as well as a joint Polish-German project to aid Lebanon. The project involves rebuilding schools. “We want to help them, support them, as we demonstrated last year,” he said.

When asked about the matter of inviting 10 Syrian orphans by the President of Sopot, he replied:

“The case of Sopot is interesting. The Sopot City President Karnowski has been cornered and is trying to benefit from this issue politically. This problem must be resolved realistically. Today Minister Witek responded to the letter of President Karnowski and pointed to the actions undertaken by the government. The letter also suggests what should be done if the Sopot wants to help in this matter,” he explained. „On one hand, President Karnowski says he wants to provide assistance to the victims of the war in Syria, and on the other hand he is unable to deal with the issues in his own backyard,” he added.

He also appealed for real action with respect to refugees, rather than just a political game of making noise. “No need to fuss, just real action. That is what the Polish government is doing. The money broadly flows to migrants and refugees,” he said.

Bochenek also addressed the issue of upcoming elections in Germany. ”This year is a heated time in German politics. From the Polish perspective a good choice would be Chancellor Merkel, but it is up to the German people, of course,” he said. "One of the candidates running for the position of German Chancellor is Martin Schulz, who is known for his aversion to Poland and is an advocate of forcing EU countries to adopt immigrant quotas. We oppose the pronouncements of Mr. Schulz on migration policy. We should be guided by our voluntary actions when it comes to EU countries,” he said.

Donald Tusk has just announced that he would run for re-election as head of the European Council.

“It's nice that Mr. Tusk finally decided to let us know,” said Bochenek and added that during the meeting with Prime Minister Szydlo, Mr. Tusk made no such declaration. “This is the Chairman who has dealt with the biggest crises in the history of the European Union,” he said.

Bochenek also responded to a question about talks between Merkel and Szydlo regarding Tusk.

“The Chancellor asked whether we have a ready position when it comes to Mr. Tusk’s candidacy. The Prime Minister replied - not yet,” Bochenek reported.

“For us it is important to change the European Union, to prevent the disintegration of the Union,” he added. “There should be no division in the European Union. Creating a two-speed Europe does not serve the Union. (...),” he said.

One of the topics discussed by Merkel and Szydlo was the construction of Nord Stream 2 pipeline by Germany and Russia. This pipeline conspicuously omits Poland.

From the very beginning, the Polish government has been negatively disposed to this issue. “This project will not serve to enhance the energy security of the EU but instead will make the European Union dependent on Russia for gas. The construction of Nord Stream II will also lead to a strengthening Russia’s influence over Ukraine,” said Bochenek.

Chancellor Merkel emphasized the commercial nature of this project. However, during discussions with Prime Minister Szydlo, she said she can see political aspects of this project, and they could be disadvantageous to Ukraine,” Bochenek added.