“Solidarność” endorses Andrzej Duda from PIS for President of Poland 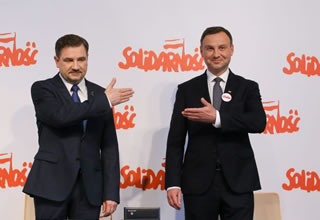 The National Commission of the Solidarity Trade Union has officially announced its support for Andrzej Duda, the PiS’s (Law and Justice opposition party) presidential candidate. Lowering the retirement age, elimination of the so-called “rubbish employment contracts” and raising the minimum wage are some of the policies specified in the “manifesto agreement” signed between the Solidarity Trade Union National President and presidential candidate Andrzej Duda.

The agreement was signed using a pen given to Duda by the late President Lech Kaczyński.

According to the “manifesto agreement:”

The presidential candidate Andrzej Duda has specifically declared the implementation of the following policies: lowering the retirement age and determining the retirement benefit package by the length of employment; providing more support for parents; reinstating the responsibility for national health and education to the state; eradicating poverty and social exclusion by increasing the minimum income threshold levels for benefit claims and introducing a fair tax system; raising the minimum wage to a 50% of the national average wage; revoking those regulations in the labor code that work against workers, such as the current working time and accounting period; eliminating the “rubbish contracts” and false self-employment; creating permanent workplaces preventing workers from poverty; strengthening the social dialogue on national, industrial and organisational levels; expanding citizen rights; firstly, in local and national referendums; secondly, in legislative proposals by mandating them to go past the first reading.

The PiS’s candidate has declared that he will reinstate the responsibility for national health and education and he committed to eradicating poverty and social exclusion, including the increase to the minimum income threshold and the introduction of a fair tax system.

Other provisions in the manifesto agreement are to raise the minimum wage to a 50% of the national average wage, to revoke the “anti-workers” regulations in the labour code, such as the current working time and accounting period, to eliminate the so called “rubbish contracts,” to create permanent workplaces preventing workers from poverty, to strengthen the social dialogue and expand citizen rights in local and national referendums, as well as in citizens’ legislative initiatives.

“The presidential election is a citizen and not a party election. In the last 25 years Solidarity has always spoken out and indicated which candidate the party members should vote for,” commented the Solidarity Chairman, after the agreement was signed. “We have not changed our way and I don’t imagine we would. This agreement is truly historic. For the first time ever, as a National Commission, we have signed a manifesto agreement with a presidential candidate. This means that Andrzej Duda does not just say things, but declares his commitment to the manifesto and its implementation. This really matters for the Solidarity,” added the Chairman.

The Chairman has also referred to the statement by the current president, Bronisław Komorowki, who recently stated that our living conditions are extremely good. Indeed they might be very good for those who do not welcome change, for those who build their success and the success of Polish economy by exploiting others, by promoting cheap labour. Solidarity wants to change that and Andrzej Duda commits to execute those changes.”

The Solidarity Chairman also addressed Andrzej Duda as follow: “No matter which way this election goes, and I deeply believe that we will win, please remember, that for the last few months you have worked hard and achieved what can’t be bought - the trust of many Polish citizens and the Solidarity members. I am convinced that wherever you go, you will never disappoint us.”

“The social dialogue on a national level is very important in connection with negotiating the manifesto, which is then for the president to implement. The president should engage and lead the nation in that dialogue and I fully support this idea. I believe the president should eliminate social divisions and communicate with the nation above the party level because the nation chooses the president to do just that,” commented Andrzej Duda, the presidential candidate. “Let today be the proof for anybody, who wonders what my presidential tenure would be like, that such a dialogue is possible, that it will be honest and based on mutual trust. I believe that today we made the first step towards implementing the manifesto and the full implementation will begin in the next few days,” concluded Andrzej Duda.