“We are going through a hard time, please don’t make it any harder for us.” Smolensk crash families appeal to protesters. 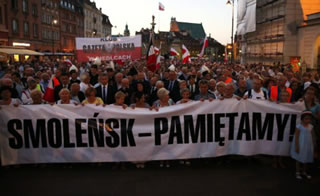 Representatives of some Smolensk crash victims’ families appealed for moderation to those who demonstrate against the monthly Smolensk commemoration service. “The current time is especially hard for us due to on-going exhumations; please do not make it any harder.”

On the 86th monthly commemoration of the Smolensk crash on June 10, 2017, the PiS politicians attended a commemorative mass and then walked to the Presidential Palace, where they laid down flowers. The commemoration service was attended by PiS Chairman, Jarosław Kaczyński, Sejm and Senate Marshals, Marek Kuchciński and Stanisław Karczewski, Minister of the Interior and Administration, Mariusz Błaszczak, Minister of Defense, Antoni Macierewicz, and Minister of Culture, Piotr Gliński.

A small group of people gathered in front of the Presidential Palace, protesting the commemorative services of the Smolensk crash victims. They were confronted by other members of general public, who carried banners with slogans, “accomplices of this crime continue to live without punishment,” and “Putin, return the evidence of your crimes.” The two groups were divided by the police. The commemoration service continued.

“We wanted to appeal to those who protest against the Smolensk crash monthly commemoration service to act with moderation and dignity towards the victims. Many of us come here every month. We are going through a very hard time at the moment, due to on-going exhumations, and we feel the need to meet and support each other,” said during the briefing Grzegorz Januszko, the father of a young crew member, Natalia Januszko, who died in the Smolensk crash. “I would like to appeal to as many people as possible to attend these services, as we really appreciate the support we get from those who have been attending. Protests against our gatherings are a recent occurrence, and I am not sure what the purpose of them is,” added Januszko.

When a journalist commented that perhaps it is Jarosław Kaczyński who provokes the protests and he should not attend each commemoration service, Januszko said: “Why would he not attend? He is the only person who lost two of his close ones in the Smolensk crash, his brother and sister-in-law. I see no reason why he should not attend.”

Jerzy Mamontowicz, brother of Bożena Mamontowicz-Łojek appealed to the protesters not to disturb the families during this hard time. “It is not easy, please let us carry on,” he emphasized. He also mentioned the exhumations, explaining that the families are going through a very hard time at the moment.

When asked why he thought the protests happen, Mamontowicz said: “from the very beginning the investigation into the Smolensk crash went wrong, the Polish government put their trust in Russia, and we should have never done that.”

Mamontowicz emphasized that the protests could still take place, it only mattered that they were conducted in silence. “Peace and silence are a priority for us,” he stated.

Weronika Chlebowska-Dziadosz, niece of Katarzyna Piskorska, another victim of the Smolensk crash, said that she never attended the monthly commemoration service, because she grieved in her own way. However, she stated that the rowdy protests offend the memory of the victims’ families, whether or not they are in attendance. “It offends our close ones who died in this tragedy, including my aunt. I just don’t understand why the families receive such treatment, especially the whistling when the Polish national anthem is sang, and I feel really, really sorry,” she emphasized.

On April 10, 2010, 96 people died in the Smolensk crash of the Tu-154M aircraft. President Lech Kaczyński, his wife, and the last President of Poland in exile Ryszard Kaczorowski, and the Central Command of the Polish Armed Forces were among the victims. The Polish delegation was on its way to commemorate the 70th anniversary of the Katyn massacre.