Radoslaw Sikorski testified in court in the Smolensk Case 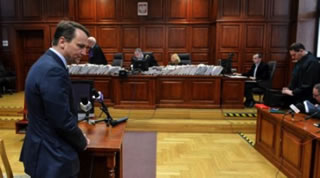 Sikorski evades responsibility. The former head of the Polish Ministry of Foreign Affairs testified in the Smolensk crash case.

The slickest way to characterise the visit of President Lech Kaczynski to Katyn in 2010 is a pilgrimage, said the former head of Ministry of Foreign Affairs Radoslaw Sikorski while testifying in the trial of Tomasz Arabski and four other officials of Tusk’s administration who have been charged in the Smolensk disaster.

Sikorski stood before the District Court in Warsaw as a witness in the trial of high officials from the Tusk administration who have been charged with failing to carry out their official duties in organizing the April 10, 2010 visit of President Lech Kaczynski to Katyn. The case is based on a complaint brought by some families of victims of the Smolensk catastrophe.

As the head of the Ministry of Foreign Affairs, I was not involved in organising the April 10, 2010 visit. At that time, I was conducting foreign policy, the Europeanisation of Russia. I was dealing with relations between Poland and the European Union and other countries, Sikorski testified.

He said that the Ministry of Foreign Affairs did not organise the visit and played only an auxiliary role in preparations for the President's visit. Regarding technical issues, Sikorski stated that it was his deputy - Andrzej Kremer - who was responsible for dealing with the Russian contacts in this matter. Minister Kremer was killed in Smolensk.

In response to Attorney Hambura’s question about the nature of President Lech Kaczyński’s visit to Katyn, the former chief of diplomacy did not want to give a straight answer. It was definitely not an official or national visit, he said. The slickest way to characterise this visit would be a pilgrimage, he added.

In court, Sikorski confirmed his 2012 testimony given in the prosecutor's office. He then stated that he had advised President Kaczynski not to visit Katyn. I suggested to the President to visit the graves in Kharkiv and take part in the Victory Day Parade in Moscow, Sikorski then testified.

Sikorski’s insolence and arrogance during the interrogations is striking. Even today he feels immune from any prosecution and totally beyond the reach of justice, said Janusz Walentynowicz, son of Anna Walentynowicz who died in the catastrophe, in the interview with “Gazeta Polska Daily.”

The key question is how it was possible that Tomasz Turowski was assigned to the Polish Embassy in Moscow prior to the President’s visit. Everyone knew that he was a dangerous agent, a spy from communist times. Suddenly, he came back from retirement to work at the Ministry of Foreign Affairs in the rank of a full Ambassador. The court today heard questions about Turowski, added Janusz Walentynowicz.