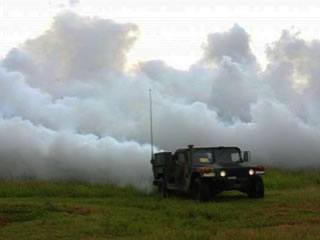 The information made public by that independent TV station comes from Aleksey Solodovnikov who is in charge of the Academy’s department of launchers and rockets. Solodovnikov talked about the invented generator during an international exhibition, called the Innovation Day of the Ministry of Defense of the Russian Federation, which took place in Kubinka, situated 60 km west of Moscow.

The TV Dozhd informed that the generator is capable of generating aerosol clouds of various kinds, adding that such artificial fog can effectively hide mobile rocket launchers even from satellites, as well as make them a difficult target for precision guided missiles.

The TV Dozhd emphasized that the artificial fog can also camouflage launches of the intercontinental ballistic missiles, such as RS-24 Yars, RS-12M2 Topol-M and RS-12M Topol.

The Russian TV station pointed out that the fog generator replaced the single use smoke grenades, so far used by the Russian Federation military forces to camouflage their mobile rocket launchers. The Military Academy’s invention might also be used for the purpose of disinfection and degasification of military equipment.