The Russian army will not settle just for Ukraine and Poland 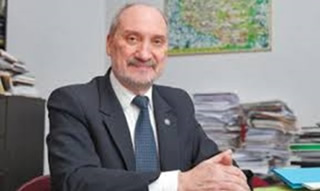 Antoni Macierewicz of the Law and Justice Party delivered an important speech on peace and security in Central Europe at an American university.

”If warnings of Lech Kaczyński about Vladimir Putin’s imperialistic ambitions had been listened to back in 2009, the Russian army would not have been in Ukraine today,” the MP told the audience at Rutgers University in Newark, New Jersey. The presentation was delivered in English and Mr. Macierewicz did very well, reports our correspondent.

”Russia has no interest in independent Poland or Ukraine. Russians, just like Germans, think in terms of expansion. The countries between Russia and Germany should vanish. It is time to build the empire.”

”According to what we have recently heard, Russia could have its troops in Poland within 3 days. The Russian army is not going to settle just for Ukraine and Poland. Russians will advance on other countries in Europe”, Mr. Macierewicz stated during the nearly 2-hour presentation.

“Five years ago no one in the world gave a second thought to the fate of Ukraine. However, President Lech Kaczyński already anticipated today’s situation. That is why he supported Ukraine and Georgia in their efforts to join NATO. Already back then he realized that Russia had already started rebuilding its empire and Ukraine would be the next step with other republics, including Poland, to follow. Unfortunately, both Russia and Germany opposed Georgia’s bid to join NATO, whereas USA hesitated,” reminded Mr. Macierewicz, pointing out the miscalculation of such approach.

“Russia and Germany have been trying to take control over Poland and nearby countries for centuries. Ukraine, Slovakia, Latvia, Romania and even Georgia are Poland’s allies, who have the same goals, but who are equally threatened,” explained Mr. Macierewicz, suggesting that Central Europe’s states should form a tighter union.

The Law and Justice MP also reminded the audience about the Smolensk tragedy of April 10, 2010.

Mr. Macierewicz’s lecture was organized by the Rutgers Council on Public and International Affairs, a student organization of the School of Public Affairs and Administration at Rutgers University in Newark, New Jersey. His presentation was a part of the Council’s World Leaders Forum.

“We are pleased that Minister Macierewicz has accepted our invitation to inaugurate the Rutgers Council on Public and International Affairs’ World Leaders Forum. Antoni Macierewicz is the legendary co-founder of the Workers' Defense Committee, commonly known as KOR, and a key Solidarity activist, whose efforts were crucial in Poland’s triumph over its Communist regime during the '80s. Macierewicz, one of Poland’s most prominent politicians, has served as the Minister of Internal Affairs and currently is in his fifth term as a Member of Parliament (Sejm),” said Edmund Janniger, the Founding President of the Council. An official reception that followed the presentation was attended by Rutgers University Chancellor Nancy Cantor and Dean of the School of Public Affairs and Administration Marc Holzer.