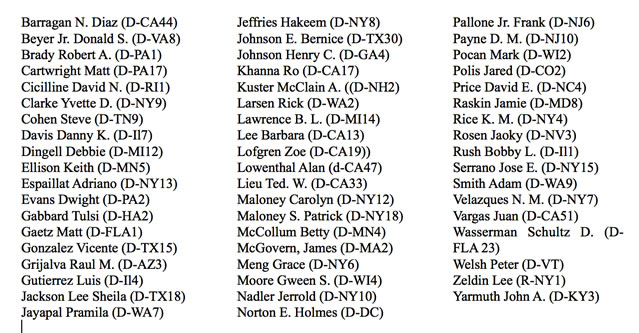 We are deeply disappointed that despite numerous appeals to you not to harm Polish victims of the Holocaust, you did nothing to prevent the flawed and harmful Bill S. 447 on Holocaust era restitution claims from being enacted into law. On April 24, 2018, this grossly unjust and discriminatory bill slipped through the US House of Representatives as non-controversial under highly controversial “suspension of the rules” procedure, by anonymous “voice vote” of about five congress representatives present, i.e. an unprecedented procedural manipulation in violation of basic standards of democracy.


As indicated on the govtrack website, there were 9,637 registered votes against this bill and only 48 votes for this bill. These numbers alone demonstrate how highly controversial and flawed this bill is. Therefore, the ‘suspension of the rules’ procedure in passing S. 447 represents clear abuse of the legislative process and violation of democratic principles of fair representation.

Despite an appeal to you issued by the Polish Catholic Holocaust Survivor and many Polish-American organizations on March 12, 2018 1/, you did not block this openly discriminatory act, but in fact you supported it by signing on April 23, 2018 a letter to US Deputy Secretary of State John Sullivan condemning Poland for “state-sponsored Holocaust distortion and denial.” In this letter, you condemned Poland for “passing a law making it a criminal offense to state that Poland participated in the Holocaust.”

Please note that the purpose of this Polish law was exactly the opposite: it was precisely to stop Holocaust distortion and denial! This law admonishes those who claim that the Polish State and the Polish Nation are responsible for atrocities committed by the German Third Reich in the German occupied Poland on the citizens of pre-war Poland. This law, like other Holocaust denial laws, punishes those who falsely and against facts make false statements like “Polish concentration camps” that assign responsibility for genocide committed by the Germans to their Polish victims.


There is no greater injustice in the history of the world than to blame the Polish Nation and the Polish State for crimes committed by the German Third Reich on the conquered territory of Poland against the conquered populations of both ethnic Poles and ethnic Jews. We refer you to the historic speech that Hitler gave to his generals on the eve of the invasion of Poland:


“… the aim of the war lies not in reaching particular lines but in the physical annihilation of the enemy. Thus, so far only in the east, I have put my Death’s Head formations at the ready with the command to send every man, woman and child of Polish descent and language to their deaths, pitilessly and remorselessly. . . . Poland will be depopulated and settled with Germans,” Hitler told his generals in a speech dated August 22, 1939.

Clearly Poland, as the primary target of Hitler’s war machine and Stalin’s genocidal policies against ethnic Poles, was the blood bath like no other country in Europe. But Poland was also unique among the European countries in another very important aspect. The only country in Europe that had no major fascist party before WWII was Poland. Thus, no natural ally for Hitler’s ideology could be found in the Polish political system. Unlike elsewhere in Europe, Poland never had any pro-German Fifth Column formally collaborating with the German occupying forces. To make up for the lack of pro-German allies, Hitler had to rely only on the German minority residing in Poland. Throughout the war, the Polish Government in Exile and the Polish Home Army employed elaborate judicial process systematically issuing and executing death sentences on German collaborators.

There were thousands of righteous Poles during WWII who risked their lives and the lives of their entire families to save their Jewish neighbors from Germans. Where are the righteous Jews today who would stand up against disparaging accusations of the Polish Nation and the Polish State for crimes committed by German Third Reich?

Instead of standing up for the historic truth that Poland in WWII was the greatest victim of two worst totalitarianisms known to mankind, you stood up on the side of the perversion of history that falsely and against the facts portrays Poland as a co-perpetrator of the Holocaust of the Jews in German occupied Poland. We are alarmed that such morally repugnant practices like turning victims into oppressors by assigning collective guilt for the crimes committed by the German Third Reich to the Polish State and to the Polish Nation did not warrant your grave concern. After all, assigning collective guilt to protected national or ethnic groups has been uniformly condemned as racist in any public discourse for a long time. But instead of objecting to smearing Poland with collective guilt in German made Holocaust, you falsely and against the facts accused Poland of Holocaust distortion and denial.

By signing the April 23, 2018 letter, you provided substantial support to the proponents of the shameful anti-Polish Bill S. 447 that aims at punishing Polish victims of German genocide as co-perpetrators of the Holocaust of the Jews. By protesting against the Polish law that makes it a criminal offense to state that Poland participated in the Holocaust you provided moral and political justification for illegal extortion of billions of dollars from Poland for so-called heirless property restitution claims for Jewish victims of the Holocaust, such claims being made to the exclusion and to the detriment of the Polish victims of Nazi Germany.

Poland is the primary target of S. 447 because about half of the amount claimed by the Holocaust era restitution proponents are against Poland. In 2007, leaders of the Jewish restitution groups estimated their claims against Poland between $65 and $300 billion.2/ This amount consists of legitimate private property claims and illegitimate heirless property claims, which far exceeds the legitimate claims. The legitimate private property claims against Poland have been estimated at $1 billion USD by the Times of Israel 3/, whereas illegal and immoral claims to so-called heirless properties in Poland that are supported by Bill S. 447 are in the range of $ 60 - 300 billion USD.

Such baseless claims could be levied by international Jewish organizations on Poland without any limitations or constraints. In April 1996, Secretary General of the World Jewish Congress Israel Singer stated that if Poland does not satisfy Jewish claims to heirless property it would be "publicly attacked and humiliated in the international forum.” 3/ Hence, the current political blackmailing and humiliation of Poland as Holocaust co-perpetrator that sponsors Holocaust denial has nothing to do with facts but has everything to do with supporting Jewish efforts to extort from Poland billions of US dollars under S. 447, while deeply harming the Polish and Polish-American victims of the Holocaust in the process.

Obviously satisfying such enormous immoral claims would cause tremendous economic hardship to the Polish people and exacerbate ethnic tensions in the USA as many Polish-Americans who are themselves victims of the Holocaust are victimized by this bill. Therefore, anyone who supports S. 447 must be mindful that such misguided attempts to rectify old grievances by creating explosive new grievances is reckless and counterproductive. Endorsing and legalizing injustice under the pretense of seeking justice poisons ethnic relations and is detrimental to building international peace and security in USA, Europe and beyond. Therefore, we consider your actions with respect to S. 447 as greatly detrimental to the vital interests of the United States of America.

1. A message to US Congress from a Polish Catholic Holocaust Survivor on Holocaust era restitution bill: https://currenteventspoland.com/news/gilbright_auswitz.html

2. On February 27, 2007, twenty leaders of Jewish restitution groups convened in Warsaw to advance their US$ 65 billion claim against Poland. Israel Singer, the general secretary of the World Jewish Congress who participated in this meeting stated earlier that if Poland does not satisfy Jewish claims, it will be "publicly attacked and humiliated". A Polish publicist called Singer's declaration a "declaration of war against Poland."