Was it possible to act decently under Jaruzelski regime? Yes!
Here is a proof that Jarosław Kaczynski refused to collaborate with SB! 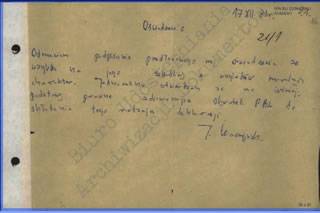 The handwritten statement shown on the left represents the direct proof of refusal to collaborate with the communist secret service SB signed by Jarosław Kaczyński four days after the imposition of 1981 martial law on Poland by pro-Moscow junta of General Jaruzelski. Currently, Jarosław Kaczynski serves as Chairman of the Law and Justice Party that rules in Poland. His twin brother, Lech Kaczynski, in 2005 became the President of Poland. By the end of his term Lech was killed in the unprecedented airplane crash in Smolensk, Russia, on April 10, 2010.

"I refuse to sign the statement submitted to me because of its harmful impact on moral character. At the same time I state that there is no legal basis that would require the citizens of the Polish People’s Republic to make such declarations. J. Kaczyński"
Dated: December 17, 1981.

There were many people in Poland like Jarosław Kaczyński who refused to collaborate with the pro-Moscow regime, but since the so-called 1990 demise of communism, the “Polish elites” preferred not to talk about people loyal to Poland. Instead, they preferred to brutally attack, criticize and discredit them.