There's room for one Donald only.
The real financial and economic trouble is yet to hit EU. 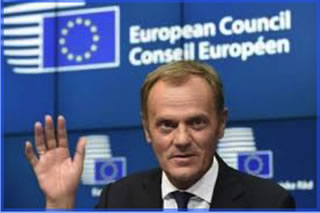 The former prime minister of Poland, Donald Tusk, might not necessarily be re-elected as President of the European Council. It seems he may not become "a president of Europe," but he may not return to Poland either, since he has left too many “skeletons in the closet” here.

The uber-bureaucratic and anti-national E.U. is clearly reaching its demise with a significant contribution from the President of the European Council, Donald Tusk. Wherever Tusk goes, he seems to be accompanied by intellectual laziness, serious destruction, and a strong chance of bankruptcy and failure. He promoted German hegemony in all possible ways, he ignored Brexit, he was arrogant towards Greek and problems of Southern Europe, and his attitude towards refugees was dangerous and irresponsible. Tusk remains insolent and arrogant towards the new American administration, in particular towards the new President, Donald Trump, not to mention his attitude towards his own country and its government. (For Poland) it is safer to place a bet on American Donald and not on the Polish one.

Not only Donald Tusk, but other representatives of the European Council, such as Jean-Claude Juncker, Martin Schulz and Frans Timmermans are apparently clueless when it comes to the scale of challenges E.U. faces today, and what must be done to protect the Union and its currency from the consequences of the economic turmoil heading towards the Old Continent, not to mention its security. Donald Trump does not mess about, and the hybrid trade and currency war with the U.S. might end with Europe's defeat.

Valdis Dombrovskis, the E.U. Commissioner for euro, warned the U.S. that "some American financial institutions might be excluded from the European market if President Trump revokes global regulations introduced back during the 2008 crisis. It is unlikely that the U.S. will care about this threat, considering that we are on the brink of "Grexit" due to Greek debt being impossible to pay off, while Brexit is about to bring serious expense, as well as political and economic uncertainty. Neither can we rule out a "Franxit" if Marine Le Pen wins. We might face another wave of refugees.

The U.S. and President Donald Trump are already pressurising Germany, Switzerland and the European Central Bank warning them not to manipulate with their currencies by devaluing them in order to achieve advantage in trade and competition. Should Fed increase percentage rates, the Swiss National Bank will have to take action to stop Swiss money from escaping abroad, as currently its percentage rates are negative, whereas ECB will no longer be free to print 80 billion euro per month to purchase bonds of Portuguese, Spanish or German motor companies. The European Union remains in danger of a monetary disaster with a vision of 1.3 trillion bank debts, and even German banks begin to experience problems. Speculations regarding bonds increase, and a large number of American bonds are in the hands of the European Union, with just Poland being in possession of 33 billion dollar. The obligations bubble grows.

The European Commission has to deal urgently with enormous costs of defence, a massive level of unemployment among young people, and a standstill in investments. But Tusk prefers to focus on fighting his political opponents by using the Polish Constitutional Tribunal as a tool. More political and electoral storms are heading towards the E.U. from France, Holland, Italy and even Germany, which will heavily affect the European economy. The President of the European Council, Donald Tusk, is undoubtedly not a right choice to deal with all these issues, and the real financial and economic trouble for the E.U. is yet to come.