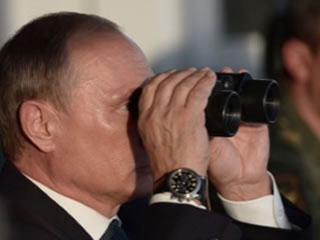 Russian President Vladimir Putin ordered his Ministry of Defense and Ministry of Foreign Affairs to negotiate and sign an agreement with Belarus on the establishment on its territory an air force base for the Russian Air Force.

Putin did not specify where such base should be located. In October 2014, the Commander in Chief of the Russian Air Force General Wiktor Bondariev announced that such base will be located in Bobrujsk, in the Mohylewsk oblast in the south east of Belarus. The intercepting fighters Su-27 will be located there.

At the beginning of September, the plans to enter into an agreement with Belarus regarding the air force base were discussed by Prime Minister Dmitrij Miedviediev at the Russian cabinet meeting. Miedviediev declared that the purpose of such base is to “provide protection of external borders of the Union State (Russia and Belarus) in the air.”

Initially General Bondariev announced that Lida in the Grodno oblast in Western Belarus was chosen as the location of the Russian air force base, later that is Baranowicze, in the Brzesk oblast, also in the Western Belarus. In March 2015 he stated that 24 fighters Su-27SM3 will be located in Baranowice.
The first four Russian fighters Su-27 landed in the 61-st air force base in Baranowicze in December 2013. Soon thereafter the information was that the Russian pilots began joint patrols of the air space together with the Belarussians in order to protect Belarussian air space of external borders of the Union State (Russia and Belarus) in the air.”

In mid-September 2015, Putin hosted President of Belarus Alaksander Łukaszenko in Soczi . According to the Russian media, the two leaders discussed, among other things, how Moscow can strengthen Łukaszenko in the upcoming presidential elections scheduled for October 11 and what Russia would like to obtain in return.