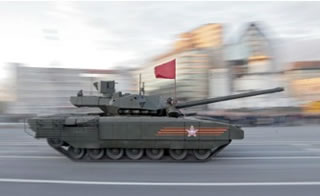 Russians are rehearsing before the Moscow Victory Day Parade, scheduled for May 9th. Over 200 tanks and armored personnel carriers have passed through the downtown Moscow. “The transit route was surrounded by a crowd of spectators,” informed Polish RMF FM radio.

The Moscow residents did not hide their excitement. “Watching the parade and knowing that we are the most powerful and fearless nation makes me incredibly proud. I have seen the Armata tank. Despite the cover on top, it looks interesting. The military demonstration is fascinating, but the key attraction is the movement of vehicles. It demonstrates our power,” said a spectator.

The announcement by Kremlin was as follows: “This year’s Victory Day Parade in Moscow will be the greatest since the collapse of the Soviet Union. Not because it is the 70th anniversary of the victory over the Nazi Germany, but because of the extravagance of this year’s parade and the vehicles that will drive through the Red Square.”

It has been confirmed that Russians will show off their new tanks and personnel carriers, which so far remained secret, in bulk. Not only the “Armata” T-14 tank will be presented in its full glory, but also, among others, the “Kurganets-25” personnel carrier.

According to the Russian military forces, 15,000 soldiers, 194 vehicles and 140 aircrafts and helicopters will participate in the parade.

“We will demonstrate an entirely new technology,” stated Dimitri Rogozin, the Deputy Prime Minister in charge of defense industry. The Armata tank has been manufactured by Uralwagonozawod, a wagon factory from Nizhny Tagil, which is in fact the only place for tank production in Russia. This factory alone employs over 27,000 people and there are now over 2 million people in entire Russia, working in the defense industry.

During the next 5 years Uralwagonozawod is to manufacture 2,300 Armata tanks. According to the Russian media, 20 of the most modern tanks have already been produced and are being tested by various armored military forces across Russia.

Other than Armata tanks and Kurganets personnel carriers, Putin will also show a new, 8-wheel personnel carrier called “Bumerang,” which will serve as infantry carrier, reconnaissance, tank-destroyer and command vehicle.

The Saturday Victory Day parade is not going to be attended by any of the Western leaders. However, leaders of the former Soviet and Asian republics are to be present. The most prestigious guest is to be the Chinese President, Chin Xi Jinping. Moscow will also be visited by the President of Cuba, Raúl Castro and the Vietnamese President, Truong Tan Sang.