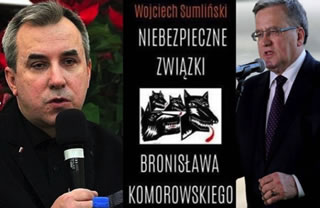 The Court has found a former WSI officer Aleksander Lichocki as guilty and journalist Wojciech Sumliński as innocent. Piotr Woyciechowski, a former member of the WSI Liquidation Commission stated: “It's a big accusation against the Prosecutor’s Office, which led this investigation along with ABW agents, operating under the direction of Gen. Bondaryk. I expect an apology from this state institution - the Prosecutor’s Office, which mindlessly and without exhibiting restraint accepted the so-called evidence presented by ABW. It was they who authorized the surveillance of members of the WSI Liquidation Commission and the Verification Commission”, says Woyciechowski, who served on both commissions.

“I expect an apology to be made to the members of this state institution who experienced repression for the proper execution of their statutory obligations,” emphasized Woyciechowski.

The Court sentenced a former WSI officer, Alexander L., to four years in prison in the case concerning the alleged corruption that took place during the WSI verification process, while the accused journalist, Wojciech Sumliński, was acquitted in the same case... Judge Stanisław Zdun pointed out that the prosecution has committed an error in this case. A former WSI officer, Leszek Tobiasz, as the Court indicated, was too hastily considered a witness, a decision which derailed this investigation.

Judge Zdun pointed out that there was no supportive evidence in the form of recordings implicating Sumliński, while the indictment against him was based on the testimonies of agents Tobiasz and Lichocki. The judge also pointed out that there was no mention of Sumliński in discussions between Pietrzak and Tobiasz. “Tobiasz is an unreliable witness, he recorded everything, but accidentally not Sumliński”, the Court pointed out, adding that Tobiasz even recorded conversations, which he conducted at ABW.

“If you decide to convict me, it will mean that this is not a country in which I would like to live. I urge the Court to come to a fair judgment”, said Wojciech Sumliński in his closing statement. He was accused by the Prosecutor’s Office working with ABW agents of taking a bribe in connection with the WSI verification procedure. The Prosecution alleged that the journalist had promised that for 200 thousand złoty he could assure a positive verification of the WSI officer, Colonel Leszek T., citing his contacts in the Verification Commission. The investigation into the case lasted since 2007.

The ruling is not final. The parties may appeal.

This case is also known as the Affair of the Marshal of the Sejm because it indirectly implicates former Marshal of the Sejm and former President of Poland Bronislaw Komorowski. Sumlinski was a tool in the WSI provocation to destroy Antoni Macierewicz, Chairman of the Liquidation and Verification Commission. As one of the attorneys for Sumlinski stated, for 5 years, Sumlinski and Macierewicz have been portrayed by the mainstream media as mentally unstable whereas this judgment proves that they were targeted for public annihilation by former government officials connected to WSI.