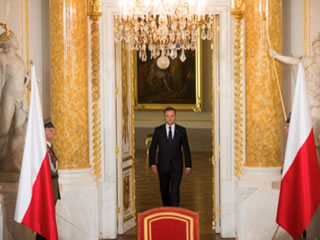 Graś: "Donald Tusk did not receive invitation from President Elect. Ministry of Foreign Affairs: Such invitation is not in accordance with Diplomatic Protocol."

Associates of Donald Tusk argue that Tusk should receive a separate invitation directly from President Elect Duda to him as President of the European Council. The Polish Ministry of Foreign Affairs disagrees.

First, 300polityka.pl announced that Donald Tusk would take part in the inauguration of President Duda. Some hours later one of the associates of the European Council Chief countered this information stating that Tusk received an invitation from the Speaker of the House as a former Prime Minister of Poland but he has not received an invitation directly from President Elect, what could mean that Duda does not wish to see Tusk at the ceremony.

As President of the European Council Donald Tusk did not receive the invitation from President Elect and we have to accept this decision made by President Elect, reiterated Paweł Graś.

However, the process of issuing invitation was conducted in accordance with regulations developed back in 2005 by the Diplomatic Protocol. One of such regulations provides that heads of states and international organizations are usually not invited for presidential inaugurations in Poland. Only their representatives are invited. President Elect could invite only his family and close friends, explained Marcin Kędryna, Duda’s associate.

Marcin Wojciechowski, a spokesman for the Polish Ministry of Foreign Affairs confirms Kędryna’s statement. In the presidential inaugurations in 2005 and 2010 heads of states and international organizations were not invited. In Poland chiefs of diplomatic missions and accredited representatives are invited instead for this occasion. They represent their respective countries and organizations with which Poland maintains diplomatic relations, explains Wojciechowski.

According to the Diplomatic Protocol of the Ministry of Foreign Affairs, a formal coordinator of the entire inauguration process is the Chancery of the President but invitations are issued by the host of the place in which a specific event takes place. For an event that takes place in the Parliament, invitations are issued by the Marshal of the Sejm Malgorzata Kidawa-Błońska, for the mass in the arch cathedral Ks. Cardinal Kazimierz Nycz, for Zamek Królewski prof. Andrzej Rottermund, and for Plac Piłsudskiego – Minister of Defense Tomasz Siemoniak.

In light of the above information, a statement by M. Ścisłowska of the Associated Press that “Tusk had no invitation from Duda and was respecting that decision,” published in the lead article Poland's Conservative president, Andrzej Duda, takes office, was misleading at best by omitting any reference to diplomatic protocol quoted by MSZ. Thus, this article directly contributed to developing a negative image of the incoming President of Poland on the international scene.