President Duda: I apologize for the Third [Polish] Republic, which called criminals "men of honor" and buried oppressors with honors. 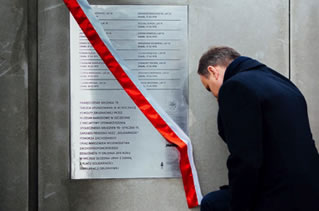 President Andrzej Duda: “I apologize for the Third Republic, which called criminals "men of honor". Which buries its oppressors with honors.”

At the 45th anniversary of the December ‘70 communist regime massacre President Duda said:

"I approach with bended knee in memory and in honor, for those who died, were injured, suffered and were persecuted for all these years. They have never been granted an elementary sense of justice from the Third Republic, neither in a legal sense nor at the state level. In the hearts of the just and proud Polish people they are and will always be honored. I have no doubt about that. But for the Third Republic, which since 1989, has not been able to face address this crime - shame. I feel only shame today. I think it is felt by all of us, as we stand here. For the Third Republic, in which communist criminals have been called "men of honor." For the Third Republic, which buried the vast majority of the perpetrators of this 1970 crime with military and state honors. Shame, simply shame."

"We could speak at length why it happened this way, but I think that I do not need to explain all this to you, we all know (...). Today I stood with a sense of shame, and, I hope, also many people of power too, and I bow my head in apology for this Third the Republic (...) The Third Republic which has failed this important exam. It failed the exam, of justice, honesty, failed the exam of essential decency and of basic effectiveness (...). I swear [...] that I'll do everything possible to lift high this Republic and repair the damage done, in order for it to finally become a fair and honest state."