President Donald Trump in Poland. We will talk to President Trump about the details. “This visit has many people poking their eyes” – says Minister Szczerski 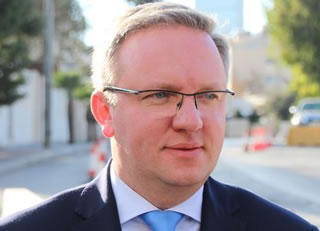 wPolityce.pl: How can Poland benefit economically from the President Trump’s visit? What will be discussed?

Krzysztof Szczerski: In the economic sense we will focus primarily on two major subjects. These will be discussed bilaterally, and among the Three Seas members. The first issue is energy cooperation. Since we have a gas terminal in Swinoujscie, Lithuania has its floating gas terminal in Klaipeda, Croatia also builds its gas terminal on the island of Krk, so the market for liquid gas is being opened in our part of Europe. Poland is the leader in gas cooperation with USA. We had the first pilot shipment delivery of LNG from United States to the gas terminal in Świnoujście, which confirmed that it is both technically and economically feasible. Now we can move to the contract discussions, to combine energy diversification with economic profitability.

Poland is to stop buying Russian gas by 2022. That date is rapidly approaching …

The Świnoujście gas terminal is still open for further competitive deliveries, and there is the long-term contract with Qatar. In addition, there are opportunities to further expand the terminal itself. Because of this existing infrastructure in place, we can talk about tangible cooperation, which, as I said, has been tested, is technically possible, and economically viable. At present, discussions are carried out between the PGNiG (Polish Petroleum and Gas Mining) and the U.S. regarding a contract to ship the American raw materials to our part of Europe. This is also important because it would be an alternative source of gas for the Central Europe, which does not flow from Russia. It would also be another very important element of diversification and security. After finalizing the Qatar and US gas links, we will embark on developing the Norwegian-Danish gas connection.

You said that during the visit of the American President, in addition to the subject of gas export, another important issue will be addressed. What will it be?

It is the long-term US infrastructure investment, as our region still has tremendous needs in transportation, telecommunications, and environmental protection. Investments with a view for a long-term rate of return are different from production investments, which we made so far. This is a brand new direction for investments, which we would like to develop through the Three Seas project.

Is Poland prepared for serious talks on at least two of the main topics you mentioned, that is, the gas exports and US investments?

Do you known what President Trump will say during his speech in Warsaw?

We know a bit more now, because General McMaster revealed what President Trump’s message will be. This message is very beneficial, because it speaks not only about our role as an American ally, and the role of our state in international relations, but also about the weight of our region, and finally about the Polish role in the region. That's what we meant. This shows Poland as an important bilateral partner in US relations, and Poland as a regional partner for America. I hope this will be the tone of his visit. We are concerned about the positive impact of this visit, as it has been noticed that individuals opposing it will try to portray it in a negative light. Obviously, this was to be expected, as this visit has many people poking their eyes. We need to be prepared for more and more attempts to disown this visit in the nearest future.