“We wanted a Range Rover but we were offered a Fiat Mini,” says Minister Siemoniak. Or is the helicopter deal with France a returned favour for French support of Donald Tusk? 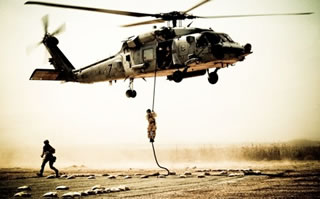 Tomasz Siemoniak, Chief of the Polish Ministry of Defence has defended the Ministry’s decision whereby the Polish Army will purchase French helicopters, instead of those produced by Poland in Mielec and Świdnik.

Mr Siemoniak insists that, despite not manufacturing helicopters in Poland, the French concern has its branches across Poland. Nevertheless, their number is marginal when compared with the Polish Aviation Works (PZL) in Mielec and Świdnik. The helicopters approved by the Ministry will be manufactured in France.

The Ministry’s decision not to approve helicopters from Mielec or Świdnik, the two aviation concerns which together with their partner companies create over 10,000 jobs, has been widely criticized.

“The simple truth is that those foreign bidders with branches across Poland, made bids that did not fulfil the standards required by Polish military forces. That is the real reason and there is no hidden agenda,” insisted Mr. Siemoniak during an interview with RMF radio, in which he denied that the requirements were tailored to a specific bidder.

According to Mr. Siemoniak, one of the bidders from Mielec and Świdnik does not have a ready for immediate use helicopter that would meet the Ministry’s expectations, whereas the other bidder (Mr. Siemoniak has not specified which) “despite having in its offer what the Ministry needs, has deliberately submitted a different bid.”

Mr. Siemoniak has not confirmed if he meant the concern in Mielec, which offered Black Hawk, whereas the Ministry expected an American type of helicopter.

“I won’t name the concern, but basically it is like being offered a Fiat mini, when you need a Range Rover. To ensure safety, we insist on the highest quality make which the concern in question could provide, and yet it did not include it in its bid,” concludes Mr. Siemoniak.

He also denies that the approval of French helicopters was a returned favour for the support from France in Donald Tusk’s election for President of the European Council. “This is utter nonsense. If that was the case, how can you explain the Ministry’s decision to follow the U.S. system of air defence? The President of the European Council has been elected by 28 states and it has nothing to do with the bid,” insists Mr. Siemoniak. He has also revealed that Poland did not stipulate that France should cease to supply Russia with Mistral landing crafts in order to close the deal with Poland.