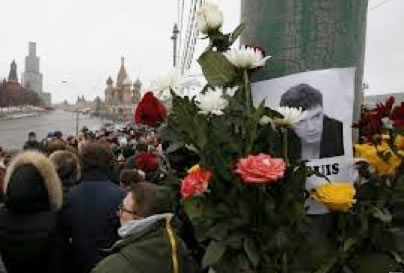 “A key witness to Boris Nemtsov’s murder, Sergey B., was about to, or already, left his job. The key Smolensk Crash witness, Colonel Nikolay Krasnokutsky left his employment in a similar manner several days after the crash,” comments Andrei Illarionov, the former advisor to Vladimir Putin, on his blog.

“From the very moment Boris Nemtsov was shot (on Friday in the center of Moscow) the Russian authorities have been making an enormous effort to avoid an independent investigation into the murder,” claims Mr. Illarinov who is an economist and currently a senior fellow at the Cato Institute in Washington. “Considering their efforts, it is highly unlikely that Boris Nemtsov’s executioners will be caught any time soon. However, attempts to cover the crime and divert public attention away from this murder make it pretty clear who ordered this terrorist assassination,” adds Mr. Illarinov.

“According to the presently available official information, there are three witnesses to Nemtsov’s death: his companion, a driver of a snow-clearing vehicle (known as Sergey B.), and a random pedestrian (Victor M). Significantly, the investigating authorities immediately released personal details of Nemtsov’s companion. She was identified as a 23-year old Anna Duritskaya, a Ukrainian national, whereas not a single piece of information about the other two witnesses has been revealed so far - all that, despite the passage of time since the shooting. It remains unknown whether the disclosed names of those witnesses are genuine. Furthermore, it turned out that Sergey B. was about to, or had already, quit his job. This scenario is similar to the manner in which Colonel Nikolay Krasnokutsky, a key witness in the Smolensk crash, left his position as a manager of air traffic controllers,” states Mr. Illarinov.

Also Vladimir Bukovsky, a well-known Soviet dissident currently living in London has pointed out that Kremlin tried to cover up the true information about Nemtsov’s assassins. “I have no doubts that Russian authorities will now actively spread rumours that the shooting was a provocation, to cast suspicion on Putin.” The FSB (Russian Federal Security Service) will promote the story to the public. The Russian government has established and runs the so-called Department “A”, which deals with manufacturing and spreading such disinformation. When FSB commits a crime, the Department “A” carries out smokescreen operations by feeding media with the most absurd, cynical and stupid stories. The example of that could be seen during the poisoning of Alexandr Litvinenko in 2006. The FSB came up with the most improbable scenarios about its former fugitive officer, that Litvinenko for example, poisoned himself by drinking a glass containing polonium-210 to spite Putin and vilify Kremlin,” recalls Mr. Bukovsky.

The day after Nemtsov’s murder, the Polish portal niezalezna.pl published a comment by Yuri Felshtinsky, a writer, and one of the most well-known critics of Vladimir Putin. He also noticed the FSB’s manipulations. “At present, Ukraine is the main enemy of Vladimir Putin. The FSB will make Ukraine an object of slanders and will accuse it of provocations against Putin. The fact that Boris Nemtsov was accompanied by a Ukrainian national at the time of his death, will be used to promote a story about Kiev’s involvement. Eventually the public will be presented with some - most probably dead - individuals with Ukrainian passports in their pockets, who will be presented to the public as the murderers,” Mr. Felshtinsky wrote.