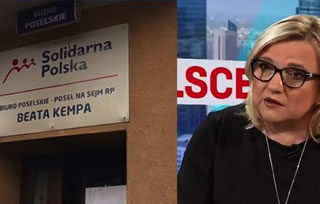 We are witnessing a very dangerous wave of terrorist attacks against members of the governing coalition. More and more people radicalized by the anti-government media follow in the footsteps of a terrorist Cyba who shot and killed a representative of the PIS party back in 2010. In December 2017 Sebastian K. pleaded guilty to setting on fire the office of Minister Beata Kempa in Syców. Ms. Kempa is the Head of the Prime Minister's Chancellery.

She is a member of the Solidarna Polska Party, which governs in coalition with the Law and Justice Party. The arsonist was charged with committing a terrorist attack and faces up to 15 years in prison. The attack on Minister Kempa’s office occurred on December 12, 2017. Sebastian K. admitted that he was motivated by the desire to influence the work of the government and the Sejm.

The portal wPolityce.pl published his testimony: “I consider myself an opponent of the Solidarna Polska party and the Law and Justice party. First of all, I do not like these laws regarding changes in the judiciary. On television it was said that these laws go so far that all power will be in the hands of one party. It's about the PiS party,” Sebastian K. testified during the interrogation.

Sebastian K. said that he does not know about political tricks and "he cannot distinguish Solidarna Polska Party and the Law and Justice Party." He explained that he drew his knowledge from television.

“I know that the ruling party is now Law and Justice. I feel concerned about changes to the law on electoral commissions,” he explained. The accused pointed out that his knowledge on this subject is drawn, among others, from TVN television network and TTV. He also added: “I do not watch other channels.”

The arsonist explained that through this attack he wanted to send a message to the local community to take part in elections. “I would like people to try to understand this political turmoil. I would like people not to be afraid to say that they are unhappy with the PiS government,” he said.

Sebastian K. admitted that he was aware of the fact that a big fire could have occurred, but he could not resist burning the office of Minister Kempa. “I do not like PiS and Solidarna Polska politicians to such an extent. I am referring to the ruling politicians, but also to our politicians,” he emphasized during the hearing.

Interestingly, Sebastian K. pointed out that he likes politicians from the Nowoczesna Party. In particular, he likes "Mrs. Pihowicz and Katarzyna Lubnauer." Had this office belonged to Mr Budka, Mrs Lubnauer or Pihowicz, I would not have done so. But it belonged to Mrs. Beata Kempa, so I did not have any reservations against it. I do not like Solidarna Polska. This party is led by Zbigniew Ziobro, about whom I have a bad opinion,” said Sebastian K.

In November and December 2017, there were several violent acts and terrorist attacks carried out against representatives of the governing collation, including the attack on the office of Rep. Andrzej Melak, Rep. Anna Sobecka and Rep. Leszek Dobrzynski.