The Jewish Voice spreads lies and hatred against Polish Catholics 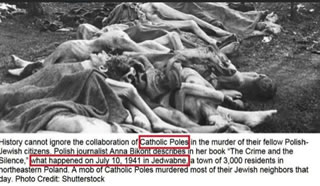 The Jewish newspaper has committed abominable manipulation. "Checking on the Polish guilt in the Holocaust" is the title of an article published in the "The Jewish Voice" newspaper. The article was illustrated with a photo showing hundreds of Jewish bodies murdered by Germans in the Bergen-Belsen concentration camp, which was located in Lower Saxony. The illustration in the paper states that this photograph ... depicting Jewish victims of "Polish Catholics" in Jedwabne.

In this hate "article" of the Jewish newspaper, one can read that "Nazi Germany decided to build extermination camps in Poland supposedly because of the scorched anti-Semitism in pre-war Poland." And further: "History cannot ignore the cooperation of Catholic Poles in murdering their compatriots, Polish-Jewish citizens."

In their attack on the Polish Catholics, the Jews, of course, invoke Jan Tomasz Gross's "findings." The author of this anti-Polish, openly racist, manipulation is Joseph Puder. The Polish ambassador in Israel, Marek Magierowski, immediately reacted in this matter objecting to this outrageous manipulation.