What is behind a violent reaction of Israel to the Polish IPN law? 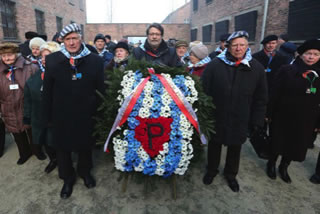 On January 26, 2018, the Lower House of the Polish Parliament adopted amendments to the law on IPN - the Commission for Prosecution of Crimes against the Polish Nation. The amendment penalizes the use of the term “Polish concentration camps” and any actions that aim at assigning to Poland responsibility for crimes committed by the German occupying power on the territory of conquered Poland during WWII.

This regulation met with unprecedented negative reaction of Israel. Benjamin Netanyahu said: “The Polish law is absurd and I strongly oppose it. We cannot change history and the Holocaust cannot be denied.” The Israeli ambassador in Poland stated that “in Israel, this amendment was treated as a possibility of punishment for the testimonies of the Holocaust survivors. A lot, a lot of emotions. The Israeli Government rejects this amendment. We hope that we can find a common way to make changes in this amendment.” Subsequently, the US Holocaust Museum issued a statement condemning the amendment which, in the opinion of Museum representatives, “would make it illegal to reference the complicity of some Poles for crimes against the Jews committed during the Nazi occupation of the country during the Second World War.” 1/

In response, the Polish Prime Minister issued a statement that in 2016 Poland and Israel issued a joint statement in which they “oppose any attempts to distort the history of Jewish or Polish people by denying or belittling Jewish victims during the Holocaust or by using false terms such as Polish death camps.".2/

The President of Poland also stated that this situation was astonishing to him and he simply does not understand it. “I am shocked because this law has been discussed for a long time. During my trip to Israel, I was also asked about this issue and we clearly stated that the law would not block the possibility of conducting research... This draft has a very clear provision that exempts liability for conducting research or artistic activity.” 3/

Why now and with such force the Israeli diplomacy attacked the Polish law penalizing lies about "Polish concentration camps" whereas everybody agrees that in fact all concentration camps on the territory of occupied Poland were 100% German? In fact they were built first and foremost to exterminate the Polish resistance to the Nazi Germany occupation of Poland. According to the Judgment of the Nuremberg Tribunal “one of the most notorious means of terrorizing the people in occupied territories was the use of concentration camps… In the administration of the occupied territories the concentration camps were used to destroy all opposition groups… The murder and ill-treatment of civilian populations reached its height in the treatment of the citizens of the Soviet Union and Poland.” 4/

So why is this Jewish attack on Poland for banning the term “Polish concentration camps”? Objectively speaking, the behavior of Israelis is irrational. The bill has been known for two years. As soon as the idea appeared on the time table, ambassadors of Israel and the United States immediately contacted the Polish government raising concerns that it could mean a ban on research on controversial matters such as Jedwabne. Of course, this was not the intention of the Polish government and parliament. The clear purpose of this bill is to stop spreading lies that attribute to Poland the responsibility for the organization and implementation of the Holocaust in German extermination camps and German concentration camps. All the concerns raised by the US and Israel were taken into account and a new paragraph was added to the proposed amendment that excluded scientific research and works of art.

To assure compliance with modern international standards, the proposed amendment makes reference to the framework solutions adopted by the European Union regarding the penalization of the Auschwitz lie. The penalization of the Auschwitz lie is the standard today in the EU. The above actions dispelled any doubts and concerns regarding the proposed Polish amendment. Also the Israeli ambassador in Poland signaled to the Polish interlocutors in the government that these modifications are fully satisfactory.

A year has passed since those talks. The act went through subsequent stages of the legislative process in the Council of Ministers, it came for debate of the Sejm. During that time, dozens of Polish-Israeli meetings took place, including direct visits of ministers and a visit of the Prime Minister in Jerusalem. These were good opportunities to raise further concerns on the Israeli side but the subject was not raised at all in bilateral relations.

So what happened now? Where did the sudden Israel strike come from? There are several reasons for this brutal unexpected and unreasonable attack on Poland.

Secondly, and the most importantly, a so-called reprivatisation law that is also pending in the Polish Parliament is the key. The value of this reprivatization bill is estimated at PLN 800 billion. Both Americans and Israelis understand the scale of this project. What is happening right now is an attempt to put pressure on Poland to tailor the reprivatization law to Jewish demands.

Thirdly, the Israeli diplomacy recognizes that the Polish state no longer neglects its history and no longer remains passive with respect to historical politics. After decades of voiceless subjugation, Poland begins to speak with her own voice, professionalizes itself, and begins to consistently restore the forgotten truth about the Polish victims of World War II. A trace of this unwelcome assertiveness of the Polish voice regarding the events of WWII can be found in the communiqué of the Israeli Ministry of Foreign Affairs.

In other words, Israel is concerned that if they do not react today, Poland could effectively restore the memory and truth about the Polish victims of WWII, which, combined with raising the topic of World War II reparations from Germany could bring a reduction in sums flowing to Israel. At stake are the next 50 years of perception of the Second World War, a candid look at who the victim was and who the perpetrator of the WWII crimes was.

This is why the Israelis hit Poland so publicly and loudly. Everything indicates it. No signal of concern was given in advance. A public blow was deliberately chosen and delivered through the brutal and sharp diplomatic tool. The goal was to stop Poland’s ability to fight for historical truth and to influence the reprivatisation law.

In the last two years the new Polish government probably made mistakes in foreign policy, but not with Israel. These attacks were made despite many significant gestures of Poland towards Israel over the last two years. For example, recently even in the case of Jerusalem as the capital of Israel or with the support of Israeli policy at international fora. Large sums of money were allocated for the restoration of Jewish cemeteries in Poland. So, the relations were positive.

Suddenly such an attack out of the blue. Probably, the Israelis just saw that a certain era was about to end. They realized that the times when Poland humbly accepted outrageously false accusations of co-responsibility for the Holocaust while being completely silent about the hecatomb of her own people during WWII were over. After all, the tool to penalize historical falsehoods has been effectively used by Israel itself for a long time now. So, Israel understands well its potential effectiveness.

The reaction of Poland to this unreasonable attack must be firm, deliberate though peaceful and on the merits. Poland must show that such intimidation has no effect whatsoever, that no one can blackmail Poland in such an immoral way. Israel must realize that the support of Poland matters. By launching a brutal attack on Poland based on false information and dishonest interpretation of facts, Israel weakens relations with an important and one of the few allies in the world.