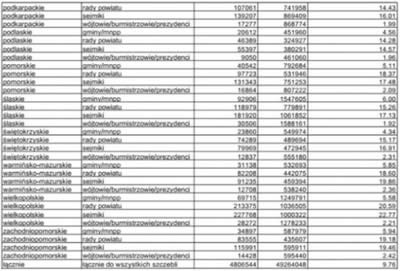 There are already more than 5 million invalid votes in the 2014 regional elections. Interestingly, this number continues to grow even though the election was held more than two months ago!

When the public almost forgot about the irregularities and problems that surrounded the 2014 regional elections, yet another sensational report on these elections surfaced from the National Election Commission (“NEC”).
In addition to the great failure of the NEC’s computer systems during the process of vote counting now the public learned that there is more to it than initially revealed. Two months after the election, the number of invalid votes continues to increase!

According to the official information from the National Election Commission, as of January 16, 2015, the number of invalid votes was as follow:

In order to better comprehend the significance of these invalid votes, the comparison with the respective results of the 2010 regional elections is helpful.

As this comparison demonstrates, the increase of invalid votes in the latest elections is unusually high. Also it is disturbing that two months after the elections, still the votes have not been counted yet. The NEC announced that all votes are counted manually and the whole process is to be completed in February 2015.

The latest revelation that the total number of invalid vote increased to 5,214,711 by mid-January brings completely new meaning to the words of the NEC’ representative announcing the "final" results ..." at a press conference: “We do not give you the results with percentage reference, because it is enormous." Indeed, it is “enormous”. Neither the failure of the computer system of dubious origin nor „specialized”, professionally trained NEC election officials are able to explain this outcome. Hence, the Polish people are left with nothing more than counting for the "miracle" or rather lack of the miracles over the voting box in the future.