Signals of Polish Television and Systems of Polish Press Agency down during Prime Minister Address to the Nation on Parliamentary Crisis. 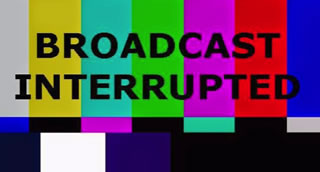 On December 17, 2016, at the pick of the parliamentary crisis, the Polish State Television TVP reported major problems with signal reception in 13 provinces. Holders of decoders of digital terrestrial television in 13 provinces reported a problem with receiving a signal of TVP in the prime time, during the key address of Prime Minister Szydlo to the Nation.

Reporters of TVP Info informed the public about the ongoing problem in their live reporting and appealed to the public to report such problems. "I am a resident of Gdansk and I would like to inform the TVP Info editors that yesterday at 8:15 PM the speech by Prime Minister Szydlo on the ongoing political crisis was announced by TVP. From this very moment there were no signals of TVP1, TVP 2, TVP Info at all. This is not an accident nor a breakdown. When the appearance of Prime Minister was delayed, the signal came back, but when about 8.35 PM the Prime Minister finally appeared, the signal disappeared again at all three stations of TVP. Once the Prime Minister ended, her speech the signal returned,"- sounded one of the emails presented during the program" Info Day," and quoted by wirtualnemedia.pl.

For the next two days, viewers and internet users have been bombarding the Polish Television about the lack of signal. The information emerged first from southern Poland, then from Pomerania and western regions.

At the heights of the Parliamentary crisis on December 17, 2016, TVP1 broadcasted the message of Prime Minister Beata Szydlo to the nation. The broadcast of Prime Minister Szydlo speech did not begin immediately after the News at about 8:10 PM as originally announcement by the Prime Minister Chancellery but instead was delayed to 8:35 PM.

The problem with the signal at the prime time between 8 and 9 PM is very unusual. Joachim Brudzinski of PIS commented on this matter at a rally in support of the government that took place in front of the Presidential Palace. – Strangely, this failure of the signal occurred just prior to the message of the Prime Minister on the state of the Republic, - he said. - Strange dwarfs and other devils are probably active here - PiS vice-chairman pointed out.

Due to the major failure of the communication system, the message of Prime Minister Szydlo to the Nation had to be repeated the next day. President of TVP also announced that TVP would take all necessary measures to find the cause of this failure. He also reported the matter to the Government Security Centre and the Internal Security Agency. The case seems very strange and incomprehensible, said Jacek Kurski in an interview with the portal Wirtualnemedia.pl.

Over the weekend of December 17, viewers in thirteen voivodeships of Poland experienced lack of signal on the Polish state television channels.

A statement in this matter was issued by a company EmiTel responsible for the signal transition. "The company EmiTel informes that on December 17 and 18, 2016, out of 137 transmitters of MUX3 signal, 11 experienced short, several minutes long, disruptions in normal emissions caused by errors in synchronization… Currently, intensive work on the elimination of these interferences is under way." Disturbances occurred in Opole, Wrocław, Tarnów, Łanięta, Wręczyca, Częstochowa, Dęblin, Tarnobrzeg, Przysucha Lubli, Piaski, Przysucha, Kłodzko, and other locatons.

A day earlier, on December 16, 2016, the Polish Press Agency PAP alarmed the Government Security Center about the breakdown of its information systems, and appealed to the Polish Internal Security Agency to investigate the circumstances of the system failure.

On Friday, December 16, 2016, all primary and back-up information systems of the Polish Press Agency PAP were down. As a result, news was broadcast only for one hour. The Chairman of PAP, Artur Dmochowski, informed the Government Security Center, and appealed to the ABW to investigate the matter.