My name is Stephen Gilbride and I am here today in a personal capacity to deliver a message from my mother, who cannot be here today to deliver this message personally. I am also joined here by my brother, Timothy Gilbride. We are grateful for the opportunity to present on the content of Bill HR 1226 “Justice for Uncompensated Survivors Today Act of 2017” and its companion bill S.447.

I myself am the son of a survivor of the atrocities inflicted on Polish citizens by Nazi Germany throughout WWII. In my early twenties, I learned more details about my Polish-Catholic Grandmother, who survived several concentration camps, experiments, sickness and starvation. In 1984, I attended the Catholic University of Poland in Lublin, Poland. I was present when the country faced down Soviet suppression with the U.S. supported Solidarity movement. I have personally visited Poland several times since attending University there to learn more about my heritage and the history of Poland. I have visited the German death camps including Auschwitz and Majdanek where almost twenty-five percent of the German Holocaust victims were non-Jewish undesirables. I will now present you:

A message to US Congress from a Polish Catholic Holocaust Survivor

While the Act recognizes and redresses the suffering of 3 million Polish Jews, the suffering of 3 million ethnic Poles and other non-Jewish victims is notably omitted and effectively excluded. The United States must not discriminate against Non-Jewish racial, ethnic, or religious groups whose members may be in the same position as Jewish claimants of atrocities and losses. This legislation sanctions open discrimination of “other victims of Nazi persecution” such as Polish Catholic Holocaust Survivors and their descendants. Such exclusion of non-Jewish victims of the Holocaust creates the appearance of impropriety and reasons for grave concern.

As a Polish Catholic Holocaust Survivor, my mother, Bozenna Urbanowicz, has been struggling her entire life for equal treatment and proper recognition of the suffering of the Polish people under German occupation in WWII. For over 30 years, she has been teaching about the Holocaust throughout the United Sates based on her own life experience as a Polish Catholic Holocaust Survivor. She was recognized with an “Excellence in Teaching Award” by the New York State Board of Education for her invaluable contribution to deepen the understanding of the Holocaust. Together with a German Jewish Holocaust survivor, my mother published an award-winning book “Children of Terror” that tells the story of Jewish and Polish children during the Holocaust in Europe.

My mother shares that her contributions and achievements in telling the truth about the Holocaust came at a heavy price. For speaking up about the Polish suffering under German occupation, my mother shares experiences of being systematically abused, discriminated against, called names, offended, bullied, verbally attacked as anti-Semite, and even physically confronted for giving testimony of Polish suffering during the Holocaust.

In 2002, my mother prepared a report about her experience of teaching the Holocaust as a Polish Catholic Holocaust Survivor in the USA and presented her findings to a Polish-Jewish dialogue group. She reported that in the 13 years of teaching the Holocaust, from 1989-2002, she collected over 2500 questionnaires and letters from students and teachers, and spoke in both private and public schools, universities, churches and civic organizations. She had an opportunity to listen to comments from survivors, educators, students, and the general public. Based on this experience, she reported on the systemic discrimination of non-Jewish victims in the teaching of the Holocaust in the United States.

A few of the experiences she has shared include:

• A teacher told my mother: "I have never heard of the Polish victims or the 5 million others. How come our schools teach only the story of the Jewish people?" My mother replied “Please raise this issue with your principal,” The teacher replied. "I can’t say anything,”. “My job would be on the line."

• In 1993 at a US Holocaust Memorial Museum seminar for teachers, a young Jewish teacher opened the discussion with the preposterous statement: "In Auschwitz Poles pushed Jews into the ovens.”

• My mother states that schools are using inappropriate books as teaching tools where the Poles are portrayed in a negative light. Books such as Painted Bird and Maus that promote ethnic division are widely used for Holocaust education in the classrooms.

• In a private school, one student once said to my mother: "We don't need to worry about the Holocaust. We are not Jewish. They only killed Jews."

• In one of the public schools, an assistant principal walking my mother to the auditorium said to her: "I was not in favor of having you come as a Polish Catholic to speak on the Holocaust.”

My mother, Bozenna Urbanowicz shares other examples of hostility and intolerance that she personally experienced as a Polish Catholic Holocaust Survivor. She states:

• At the First Hidden Child Conference in New York when she introduced herself at a workshop as a Polish Catholic Holocaust Survivor, she got very angry looks. Later, as she walked down the hallway, a woman came behind her, hit her on the shoulder, and cursed her. She wondered why one human being would do that to another human being.

• Once she was invited by a member of a Jewish group to a meeting in New York to tell them how she teaches the Holocaust. When she finished the presentation to the group, she asked the group whether there is a reason why they can't broaden the Holocaust education. They responded that they can't. So, be it. The member-friend who invited her to speak later apologized and stated he wanted to do something good but it did not turn out that way...

The above examples illustrate a persistent pattern of discrimination against Polish Catholic Holocaust Survivors and a systemic bias against non- Jewish victims in Holocaust education.

Applying her own life experience to demonstrate what happened to ethnic Poles under German occupation in WWII, my mother, Bozenna Urbanowicz has been on the forefront of the struggle for truth and justice for Polish Holocaust Survivors. She reminds us that the US Holocaust Memorial Museum in Washington officially recognizes 11 million victims of the Holocaust: 6 million Jewish and 5 million non-Jewish victims, often referred to as “others”.

My mother states: “That is who we are – “others” - the non-Jewish victims of the Holocaust.

My mother, Bozenna Urbanowicz, states “We, the Polish victims of Nazi Germany are not given the proper recognition in the teaching and recognition of the Holocaust. Today we are merely the ‘other victims.’ We have no face, no name, we are nobody. That is how the Polish Catholic Holocaust Survivors are treated. Is that the way we, human beings, should treat each other?”

My mother emphasizes that “Such practices must stop.” “The Holocaust messaging must be deepened and broadened. I want the visitors who leave the Holocaust Museum, which is 49% federally funded, to be able to tell me what the Germans did to the non-Jewish Poles, to the Gypsies, and to other ‘undesirables’. Millions of Polish victims must not be treated as anonymous “others” of the Holocaust!”

My mother, Bozenna Urbanowicz, believes “We cannot expect the next generation to live in peace if we are promoting one side, while diminishing the other side of this important story. If we keep distorting history in such a cruel and hateful way, we will not have peace on earth and the slogan "never again" will mean nothing eventually.”

My mothers’ experiences leave her to conclude that “the systemic marginalization of Polish victims of the Holocaust, relentless exclusionary practices and policies coupled with disregard towards ethnic Poles represents a persistent pattern of discrimination of the Polish victims of WWII. The rapidly spreading anti-Polonism based on drastic distortion of history and inflammatory rhetoric results in the stigmatization of the Polish ethnic group. The long-lasting grievances of the Polish American community for the disregard of Polish victims and their descendants subjected to German and Soviet genocide have been transformed into a pattern of systemic abuse of the entire Polish ethnic group, exacerbating tensions in ethnic relations in the American society.

My mother concludes “The glaring discrimination of the Polish Catholic Holocaust Survivors referenced in Bills HR 1226 and S 447 represents a deepening of ethnic discrimination of Polish Americans.
We call on the US Congress to immediately withdraw the shameful inequitable legislation, assure proper respect for Polish victims of Nazi Germany, in particular Polish Catholic Holocaust Survivors like my mother, Bozenna Urbanowicz, and fundamentally support Holocaust representation that is a balanced presentation of history, promotes friendship and peace, and discourages discrimination, ethnic bias, and the manipulation of history.

We thank you for your time.
Stephen and Tim Gilbride 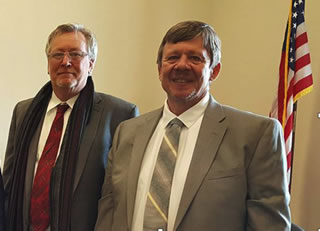