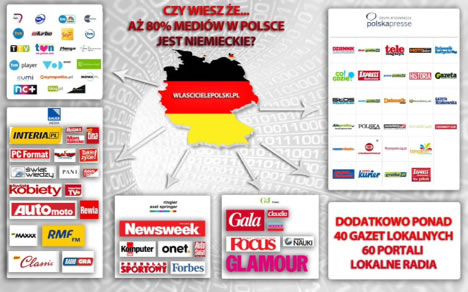 By reading Polish news articles in print and online with no critical eye, you are thinking the way that Germans want you to think. This is because 80% of Polish-language media is German-owned.

Nearly all Polish media outlets are now in the hands of the German capital. On Friday, September 5th, 2014, the Polskapresse group, owned by the German Verlagsgruppe Passau, singed a deal acquiring the Express Media company, which publishes local newspapers, including Express Bydgoski and Nowości—Dziennik Toruński.

According to Polskapresse, the latest deal included all publications owned by Express Media—that is seventeen local weekly newspapers and two regional daily newspapers in the Kuyavina-Pomeranian Voivodeship as well as a newspaper printing facility.

In total, the German consortium will be publishing nineteen regional daily newspapers in Poland! Last year, Polskapresse purchased the Media Regionalne company, which itself owned several dailies, paid and free of charge weeklies, as well as fifty internet services and five printing shops.

Apart from the Polskapresse consortium, only five regional weekly newspapers exist on the Polish market.