The Germans sold to the Russians a petroleum consortium with concessions to mine shale gas in Poland. 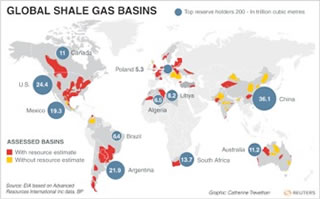 According to the newspaper, the buyer of the Dea Group is the LetterOne Group, an investment firm under the auspices of the Russian Alfa Group, itself controlled by the oligarch Mihail Fridman. RWE sold RWE Dea to Fridman’s firm for 5.1 billion Euros. The group is interested in natural gas and oil mining in Germany, Great Britain, Norway, and Egypt, and furthermore it owns underground natural gas tanks in Bavaria.

In Poland, the Dea Group has acquired two concessions for the mining of oil and shale gas in Malopolska and Subcarpathain Voivodships. This acquisition took place at the beginning of 2014. One of these concessions is related to the mining of petroleum reserves, while the other is concerned with natural gas. The Germans have already carried out seismic 2D surveys, and the group was preparing to carry out the first drillings.

RWE Dea is moreover in possession of 190 concessions for exploratory surveys related to mining natural gas and petroleum reserves across the globe, including Germany, the North Sea, and Africa. The above-mentioned transactions were briefly called into question during March of last year, when events in Ukraine severely strained Russia’s relations with the West. The German government nevertheless agreed to the sale of Dea. The transaction has now been finalized.

“Dea has acquired a new owner who wants to bring in long term investments to the field of oil and natural gas mining and who will lead the firm into a positive future,” — said delighted General Director of RWE Peter Terium, cited in the communiqué of the German business consortium. He underscored the fact that the agreement negotiated with LetterOne was “very good.”

At the same time, however, British leaders made a decision to block the sale of Dea to Fridman, because they didn’t want twelve natural gas and oil reservoirs located in British territories in the North Sea to fall into Russian hands. London explained that mining these reservoirs could encounter significant red tape in the event of sanctions placed against Russian oligarchs and it could furthermore create significant threats to the natural environment and to the health of affected peoples.

Likewise, the government of Great Britain did not agree to give Russia a guarantee that it would not confiscate the North Sea reserves, in the event they are subjected to sanctions. The RWE consortium announced the sale of the Dea Group to Russian oligarchs after Russia’s invasion of Crimea.