The European Commission approves a joint venture by Daimler and Kamaz. 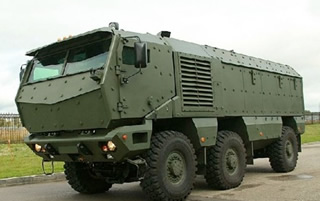 The European Commission has approved the creation of a joint venture by Daimler AG, a German automotive company and Kamaz OJSC, a Russian truck manufacturer. EU portal euractiv.com is astonished by the decision, since Kamaz is also a producer of armoured vehicles, some of which form a part of equipment used in the Ukrainian crisis.

The German and Russian joint venture will include mainly a production of light-duty and medium-duty trucks as well as their parts. The fact remains that a large part of Kamaz OJSC production is armoured vehicles for the use of Russian armed forces. Undeniably, Kamaz vehicles constitute a part of the equipment used by Russian military units in Donbass. The European Commission seems to have ignored that fact, and has raised no concerns over the nature of Kamaz manufacture.

When questioned by euractive.com, whether the commission hasn’t noticed that Kamaz is a military equipment producer and Russia is subject to sanctions including an embargo on military equipment export and import to and from Russia, the Commission gave a laconic statement:

“The joint venture in question refers to truck production in Russia and Belarus only. It does not breach the EU competition rules, protecting free competition in all EU countries. The European Commission approves mergers based on merits independent on political context.”

The merger compliance with EU sanctions has not been mentioned. According to euractiv.com those sanctions haven’t so far affected a good economic relation between Russia and EU. The portal cites Siergey Chemezov, a CEO of Rostec (a Russian company dealing with arms), who has recently been bragging that no significant economic joint project with EU had been suspended.

"None of the projects launched before sanctions has been halted”, he said. Chemezov has also claimed that Russia continued to liaise with Italy in manufacture of military helicopters to enhance offshore operations of Russian navy.

Edgars Rinkēvičs, a Latvian Minister for Foreign Affairs is indignant. “Despite no formal reasons, there is a moral and political motive to prohibit the merger. How can it be allowed given the Crimea annexation and Russian invasion on Ukraine?” he asks. Mr Rinkēvičs concludes that Germany, as usual, puts its interest before its solidarity with EU, which puts Germans in a bad light.