Who’s to blame in the exhumations scandal? 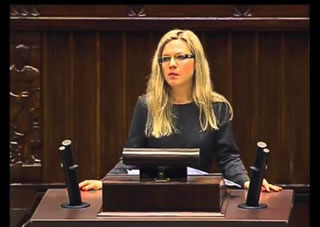 “Donald Tusk is responsible for the negligence. It is easy to retrieve the statements he made at the time, in which he admitted full responsibility for all the decisions made regarding the Smolensk crash,” Małgorzata Wassermann, daughter of MP Wasserman killed in the Smolensk crash, told the Polish Radio.

As reported by the National Prosecution Office, remains of seven other individuals were found in the coffin of Gen. Bronisław Kwiatkowski. How would you comment on the results of Gen. Kwiatkowski’s exhumation?

It is very sad news for Mrs. Krystyna Kwiatkowska, and the General’s family, but also for other victims’ families. Individuals who neglected their duties and who were responsibile for this particular case, as well as tens of others, should face the consequences.

Who is responsible for the fact that Gen. Kwiatkowski’s coffin contained remains of seven other people?

When it comes to the medical examination and burial, the legal responsibility lies with the Prosecution. The charge of not fulfilling its official duty also applies to the Prime Minister at the time, Donald Tusk. It is easy to retrieve the statements he made at the time, in which he admitted full responsibility for all the decisions made regarding the Smolensk crash. Such a statement was made when he was asked about due care in the investigation into the tragedy from April 10, 2010. He openly admitted then that he took full responsibility for this investigation.

There are voices claiming that all the mistakes regarding the remains were made because the families wanted quick burials.

It is completely untrue. None of the families ever tried to speed up the process. Quite the contrary, we hoped the investigators will take as much time as required. In our case, my father’s remains were in Warsaw. A mass was conducted on Piłsudski Square in Warsaw, and on the way to that mass we passed a convoy taking my father’s body to Kraków. We thought the reason for his remains to have been held up in Warsaw was for the purposes of forensic examination, which, as we later found out, was not the case.

The Health Minister at the time, Ewa Kopacz, made her way to Smolensk, and she was present when the remains were placed into the coffins. Should she also be held responsible?

Minister Kopacz has to explain the nature of her visit to Moscow. She should do it an official way, compliant with the law, and she should be informed of the criminal liability when making her formal statements. It is her duty to explain what her prerogatives were and who authorized them. So far, she has been changing her version of why she was there, depending on what irregularities came to light. Let’s not forget that she took part in a discussion with the Russians, in response to the Russian request for a Polish representative. The Russians wanted to know whether Poland wished international involvement. She famously replied to this question “no, because we trust our Russian brothers completely.” Who authorized her to make such a decision? Additionally, when it came to light that she misled the public, she changed her version, saying she went to Moscow on a private visit, to help. We need clarification as to why she was there, what decisions she made, why, and what the consequences of those decisions were.

Following Gen. Kwiatkowski’s exhumation, should there be a new investigation in order to punish those responsible for this scandal?

Investigations are ongoing and I see no need for a new one. I think evidence should be gathered from the already ongoing investigations. Back in 2010, I pointed out to the Prosecution that the forensic investigation was incorrectly conducted in Russia. The doctor, who examined my father’s body, was interviewed. When he familiarized himself with the autopsy report, he listed the organs that were removed as a result of an earlier surgery but were still found in the Russian report. That should have been a clear indication for the Prosecution that all forensic examinations should have been conducted in Poland, rather than relying on the Russian documentation.

How did the Prosecution react to your claim?

Do you think the actions taken by prosecutors were intentional, or were they simply a result of negligence and incompetence?

We would need to ask those who took those actions what their motives were. I am only able to comment on the events that took place. Claims that Poland was not prepared for such investigation are not true. The early documentation from the Military Prosecution includes a letter from Polish forensic medical examiners. They confirmed that they were ready to travel to Russia in order to examine the victims’ remains. Having received no reply, they sent another letter, asking if their help was needed, and emphasizing that certain proceedings cannot be repeated, thus, if the government was not interested in their help, it should at least ensure that correct procedures were followed. They also advised in that letter on how to achieve correct and genuine results. However, they did not receive any response to that letter, either. I don’t want to judge, because only having the full evidence one can prove who had what intentions, but important facts not commonly known to the general public should be revealed.