Freedom of Expression and Its Double Standards in German Media 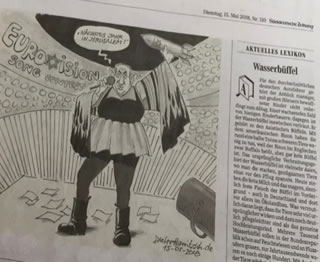 “The shocking killing of dozens and injury of hundreds by Israeli live fire in Gaza must stop now,” wrote Zeid Ra'ad al Hussein, United Nations High Commissioner for Human Rights, after Israeli forces killed more than 60 Palestinian demonstrators and injured over 2,000 on May 14, 2018. “The right to life must be respected. Those responsible for outrageous human rights violations must be held to account. The international community needs to ensure justice for victims,” Zaid added.

The wave of violence which swept through Gaza recently and Israeli war rhetoric were reasons enough for a German 85-year-old satirist Dieter Hanitzsch from Süddeutsche Zeitung, one of Germany’s largest newspapers, to portray the Israeli Prime Minister Netanjahu as a winner of the European Song Contest holding a rocket in his hand and saying, “Next year in Jerusalem!” Shortly after the caricature was published, Wolfgang Krach, editor-in-chief of the German daily, accused Hanitzsch of anti-Semitism, apologized to the readers and general public, and fired his employee of many years.

Article 5 of the German Constitution guarantees freedom of expression. Evidently, though, this and other basic legal principles relating to the media and free speech do not apply in Süddeutsche Zeitung when it comes to criticisms of Israel.

When it comes to criticism of Poland in Süddeutsche Zeitung, however, the rules are suddenly reversed. In an opinion piece on legal actions against Polish satirists Antoni Szpak and Klaudia Jachira, the Warsaw correspondent of Süddeutsche Zeitung, Florian Hassel, lashed out at the Polish prosecutors who pressed charges against both artists. Szpak was charged for saying “stupid and smug country” in regard to Poland and Jachira for holding a microphone with a logo of the Polish state television TVP in her own satire show (http://www.sueddeutsche.de/kultur/meinungsfreiheit-in-polen-der-kampf-der-herrschenden-gegen-spott-und-ironie-1.3987237). While the prosecutors’ charges are bizarre, they are very much alike the practices of Süddeutsche Zeitung towards Hanitzsch.

Such double standards are not funny. The editor-in-chief of the Munich-based daily did not respond to my inquiry: Why it is OK to criticize Poland but not Israel? At least, the Warsaw correspondent of the German daily, in a personal communication, admitted that the newspaper’s dismissal of Hanitzsch was wrong.

Süddeutsche Zeitung is by no means the only German newspaper that upholds freedom of speech selectively. In February 2017, a caricature in the Berlin-based Tageszeitung (TAZ) suggested that Polish leader Jarosław Kaczyński is a Nazi. The attribution was presented deceitfully, as a thought in the mind of Chancellor Angela Merkel: “Kaczyński: you stupid Polish Nazi!” 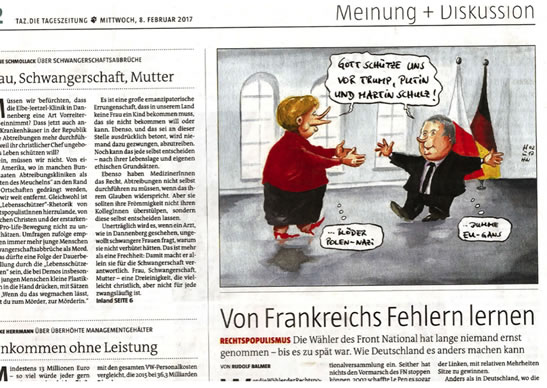 My inquiry to Georg Löwisch, the editor-in-chief of TAZ, was ignored. Another addressee of my inquiry, Christian Ströbele, a prominent member of the German Green Party, one of co-founders of TAZ and trustee of the TAZ Panter Foundation, condemned the caricature. He called falsifications of history “unacceptable and unbearable,” and suggested to take the case to a court. Other German politicians also recommended filing a complaint with the German media watch dog “Presserat” or taking legal action. A question arises, why the Polish Embassy in Berlin did not come up with this idea?

Unfortunately, such offensive falsifications turn up in other leading German media. The magazine Focus, the daily Frankfurter Rundschau or the public broadcaster MDR have all attempted to portray the Polish nation as partially responsible for the Holocaust. Anette Dittert, a German freelance journalist with ARD, the world's second largest public broadcaster and producer of contentious documentaries about the Polish ruling party PiS, has recently complained again that Poland is turning into a fascist and xenophobic country.

Infuriated by this immoral campaign to conflate the Polish WWII victims of aggression and genocide with the German authors of the Holocaust, Polish authorities are trying to defend Poland’s good name on the world’s stage.

The legislation passed by the Polish parliament in January 2018 and signed by President Duda was an attempt to combat this unjust, inaccurate and inflammatory reporting about Poland in the international mainstream media. This rightful action to punish those who intentionally turn Polish victims into perpetrators has been deliberately misinterpreted by Israeli and Western journalists and politicians, who instead of supporting the punishment of the Holocaust lies, dismiss it as a tool to cover up alleged crimes perpetrated by the Polish State and the Polish people during the German occupation of Poland.

Such malicious interpretation could not be farther from the truth; the law in no way obfuscates wrongdoing by ethnic Poles against Jews under the German occupation. The simple truth is that, seen in its right proportion and context, Poland has little to apologize for in this regard. The majority of Poles has never collaborated with the occupying forces and thousands of Poles lost their life while rescuing Jews. Strident efforts to criticize the law are intended to disguise this plain and simple fact by muddying the water and shifting the guilt for the Holocaust. The law may not be perfect, but it’s just one of the tools to counter the powerfully established, aggressive and hateful propaganda that’s being waged against Poland.

TAZ’s editor-in-chief, Georg Löwisch, made NO apology for the Kaczynski caricature of February 2017. A few months later, though, he humbled himself; he apologized for another TAZ satire, this one mocking the late Chancellor Helmut Kohl (http://www.taz.de/In-eigener-Sache--Titelseite/!5421768/). TAZ published a picture of flowers from Kohl‘s funeral under the title, “Flourishing Landscapes.” This was an allusion to words spoken by the “chancellor of unity,” who in July of 1990 forecast an economic boom in the Eastern states of the newly united country. Kohl promised: “In a joint effort we will soon turn (the East German regions) Mecklenburg-Vorpommern, Saxony-Anhalt, Brandenburg, Saxony and Thuringia into flourishing landscapes.” As we all know, Eastern Germany has hardly flourished, and the price of German unification was immense. 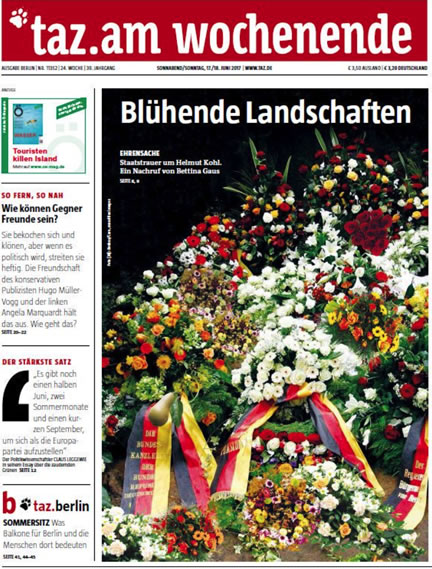 There were jokes in the past about “a Pole, a Russian and a German.” The Pole was always clever; the Russians and Germans were gauche and helpless. In today’s media, from serious articles to humorous caricatures, not only is it the Poles who are bird-brained, but they are accused of war crimes actually perpetrated by Nazi Germans. Refutations of these immense historic lies are buried and ignored whenever possible. Material efforts to uphold the truth, especially regarding Poland’s suffering in the Second World War, are viciously attacked and undermined.

It is not Poles who killed the 60 Palestinians, but in truly Orwelian twist it is Poland which is stigmatized in the German media as a country which doesn’t abide by legal standards or common European values, a country which “stifles Holocaust testimonies” and chases the satirists.