Was the Warsaw’s Łazienkowski bridge fire caused by the Russian intelligence? 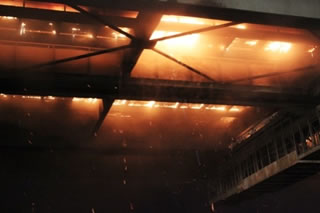 The investigators for the ABC weekly claim that the Russian intelligence services actively run secret operations across Poland, including sabotage! The shocking allegations published in the latest issue of ABC weekly refer to the Warsaw’s Łazienkowski bridge fire and the Russian hackers’ attempts to break into the Polish government computer systems, including the ones most crucial to Poland’s security.

The investigation into the fire that devastated the Łazienkowski bridge back in February, led to information that it could have been an arson committed by the Russian intelligence. “Have the Russian intelligence services been infiltrating Polish military forces and government for months? Have they set fire to Łazienkowski bridge in order to cover up their tracks?” ask the ABC weekly’s journalists.

Gigantic flames and temperatures reaching even 1000 Celsius degree - that was the scene of the Łazienkowski Bridge in the heart of Warsaw. The first calls for help reached the fire squads on Saturday, February 14, 2015 at about 5:30 PM. Forty fire trucks took part in extinguishing the bridge fire. The fire fighters were supported by additional city trucks from the water and sewer department supplying special water pumps and boats. The operation lasted 38 hours.