Cyberattack interfered with the arrival of US troops to Poland 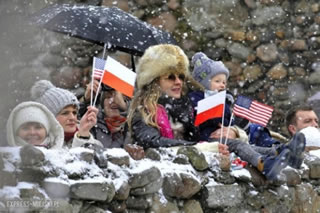 Hackers crashed the official site of the city of Żagań and over 100 other municipalities in Poland. They posted statements calling for protests against the presence of American troops in Poland. The mayor of Żagań vows that perpetrators will be punished. It is possible that this was an attempt to test the sector responsible for cyber security of Poland.

On January 6, 2017 in Żagań a festive celebrations took place welcoming American soldiers, who came to Poland to reinforce the Eastern flank of NATO. The occasion was marked by the presence of Prime Minister Beata Szydło as well as Minister of Defense Antoni Macierewicz. While Allied Forces were being welcomed, hackers launched their attack by crashing the official site of Żagań as well as 100 other municipalities with a message calling for protests. The mayor of Żagań issued the following statement in this matter:

The Mayor of Żagań firmly declares that the City Council of Żagań is in no way connected to the content that appeared on the Internet as a result of a crime of malicious hacking attack directed at the Polish State. We had nothing to do with this contents. At the same time we would like to announce that the actions have been undertaken to find and punish the perpetrators of this attack - reads the statement available on the City of Żagań website since January13th, 2017.