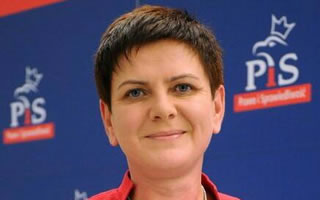 Polish Prime Minister Beata Szydlo was injured in the car crash and was taken to the hospital. The police and prosecutors are securing the traces at the crash scene. According to preliminary findings, the crash was caused by a driver of Fiat Seicento, who didn't keep precautions.

A spokesman for the Chief of Police Insp. Dariusz Ciarka reported that the incident took place iat 7 pm n Oswiecim. If anyone knows where the railway station is, that is the area where the column of government vehicles was moving. Suddenly a person driving a Seicento Fiat began a maneuver to turn left. This led to a collision of the second vehicle in the government column, a vehicle which transported Prime Minister Beata Szydlo.

The spokesman of Malopolska police Sebastian Gleń said that Prime Minister Szydlo rode in the second car in the column. That is the car with which the Seicento Fiat collided. The Prime Minister and two members of the Bureau of Government Protection were taken to the hospital.

The investigation to determine the cause of the crash is ongoing. All drivers involved were tested for alcohol. The government column was not speeding and the weather conditions were good, reported the Malopolska police spokesman at the scene of the crash. Drivers from the government column and from Fiat were sober, reported the officer. Three people injured in the accident were taken to the hospital, he added.

Fiat driver’s injury are not serious. However injury to the BOR officer are serious - the legs and pelvis are probably fractured, he said. In order to avoid a collision with Fiat, BOR driver bounced to the left. Unfortunately, while turning to the side, he hit a tree, so the car is damaged, - the officer explained.

The police reported that the driver of Fiat Seicento is a 21-year-old man. The spokesman also stressed that the government column was moving as "privileged in the full sense of this word," and the incident took place shortly after the column left the roundabout.
The Head of the Polish Government is injured but her life is not in danger. She is conscious, and doctors determine her condition as stable.

At approx. 11 pm a helicopter with Mrs. Prime Minister Szydlo should land in Warsaw. She is transported to a hospital in Warsaw.
All the services of the Ministry of Interior have been involved in the investigation of the cause of the accident. The crash scene has been secured.

Lately, the Polish top officials have been involved in a series of worrisome car incidents. The crash involving Prime Minister Szydlo was preceded by the recent incident that involved a column of government cars, which transported Minister of National Defense Antoni Macierewicz from Torun to Warsaw on Highway A4. Several months ago, the car with President Andrzej Duda experienced a broken tire while driving full speed on a highway. For Prime Minister Szydlo it was the second incident involving her convoy. Another car in a column of government cars with Prime Minister Szydlo was involved in a collision during her visit to Israel.

Bad luck? The Government Protection Bureau has repeatedly stated that lessons were learned from the incident that caused the broken tire in the presidential car.

But this series of dangerous transportation incidents involving top Polish officials makes the Polish people very nervous. The latest incident occurred on Friday. The most bizarre unsolved crimes that claimed the lives of top public officials in Poland also took place just before long weekends that hamper robust investigation. Furthermore, a similar series of bizarre airplane incidents involving top officials preceded the Smolensk tragedy in 2010. Back then, the public was exposed to a series of air transportation problems over a longer period of time. People were used to hearing bed news blamed on chaos and incompetence of the people involved. Hence, the public was well predisposed to accept the usual explanation that chaos and incompetence of people involved caused the crash.