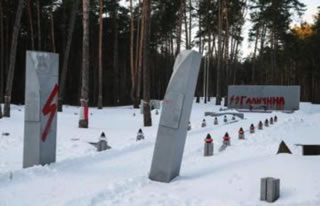 The Polish cemetery in Bykovnia near Kiev has been vandalized. Unknown perpetrators painted signs that, among other things, praise SS-Galizien – TVP Info reported.

We have undertaken appropriate steps to clarify the circumstances of this incident, said the spokesman for the Polish Ministry of Foreign Affairs.

Unknown perpetrators daubed red paint over the cemetery dedicated to the victims of totalitarianism in Bykovnia near Kiev and attempted to destroy the entrance to the Polish military cemetery, stated Bohdan Bilasziwski, director of the complex. It happened at night and the signs were noticed in the early morning. The police is working on the site.

“We have undertaken actions to clarify the circumstances of the vandalism at the cemetery in Bykovnia,” Jan Dziedziczak, Deputy Minister of Foreign Affairs responsible for Polish diaspora said on Wednesday.
During the parliamentary session of the Committee for Communication with Poles Abroad, the minister referred to the news on unknown perpetrators vandalized the cemetery of totalitarianism victims and attempting to destroy the entrance to the Polish military cemetery there.

We have undertaken actions to clarify the circumstances of the case, we are demanding that Ukrainian side investigates the case and catches the perpetrators – Mr. Dziedziczak said.

According to him, the damage in Bykovnia was discovered by the team of Chinese television crew who were preparing material about the cemetery.

According to the information we have obtained both parts of the cemetery were damaged, both Polish and Ukrainian one, he added.

He stressed the fact that information on damage to the cemetery is „very sad indeed.”

The Polish Ambassador in Ukraine, Jan Piekło, informed PAP that the Polish Embassy in Kiev issued the diplomatic note to the Ukrainian Foreign Ministry on the matter of vandalism that took place on the Polish military cemetery dedicated to the victims of the Katyn crime who are buried in Bykovnia.
The site is being forensically investigated and we are awaiting for the results, he said.

The Polish Military Cemetery in Kiev-Bykovnia was built in 2011-2012 at the initiative of the Polish Council for the Protection of Struggle and Martyrdom Sites. The mass graves in Bykovnia hold the remains of 3435 Polish citizens from the Ukrainian Katyn List, who were murdered by NKVD in 1940. This is the fourth mass extermination site under the Katyn execution order of March 5th, 1940. This cemetery was opened to the public following the opening of other Katyn execution commemorative sites in the Katyn Forrest, in Miednoje and Charkiv in 2000.

On its grounds the cemetery holds the altar with victims’ surnames, Bell of Remembrance and symbols of multi-confessional nature of the II Polish Republic – Latin and Orthodox crosses, David’s Star and Muslim Crescent.