“The goal of the new government is to audit and transform state institutions, to assure good governance,” says Prof. Chwedoruk about Beata Szydło’s cabinet. 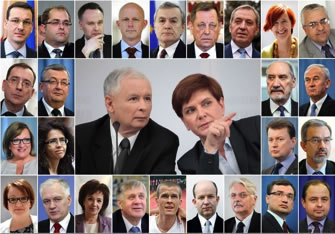 Antoni Macierewicz, Zbigniew Ziobro, Mariusz Błaszczak are symbols of change. Their presence rewards the Law and Justice party members, as well as the party’s most devoted supporters. Thanks to their loyalty the Law and Justice survived and swiftly won this year’s elections,” said prof. Rafał Chwedoruk.

wPolityce.pl: Beata Szydło and Jarosław Kaczyński have introduced the members of their new government. Is there any consistency behind their choice?

Prof. Chwedoruk: In my opinion, the choice of the new cabinet is rather paradoxical, since it seems like its aim is to prepare state institutions for proper governance. There are numerous ministers at large. This gives the government a chance to review the current institutions to see which of them can be reformed, which can remain unchanged, which should be terminated, and which need a change in their responsibilities. Such a large number of ministers is a sign that their task is not only to review and restructure the current institutions, but also to prove their competencies in order to become ministers in new departments on a more permanent basis.

However, there are still tasks for this government to complete. What strategy do you think the government will adopt?

I think the government will aim at delivering on those electoral promises that are easiest to implement.

Yes, this government has indeed been formed to achieve a multidimensional balance. Beata Szydło represents the moderate side of the Law and Justice. The presence of Prof. Gliński and Jarosław Gowin is to appease those voters who understood that encouraging hostility towards the Law and Justice Party is pointless. Some of the members are rather distinctive, like Antoni Macierewicz, Zbigniew Ziobro or Mariusz Błaszczak. They symbolize change and their presence rewards the party members, as well as its most devoted supporters, because thanks to their loyalty and determination the Law and Justice party survived and won this year’s elections.

What does this mixture of people signify?

It signifies a carefully planned and prepared, unaggressive change, as well as the willingness to involve and cooperate with their coalition partners, which is emphasized by the presence of Jarosław Gowin i Zbigniew Ziobro. The Law and Justice Party demonstrates their seriousness and delivers on their coalitional commitments even if this is inconvenient. In my view, the presence of Adam Lipiński, who mediates between the government and the Parliament, is also significant. His role might be a practical need, but it also means that the Law and Justice will fight to gain more supporters within the Sejm. Looking at a long-term perspective, the fate of the party and its projects might be dependent on MPs associated with Gowin and Ziobro.

Mateusz Morawiecki, currently a chairman at a bank, has a curiously strong status. Despite not having any earlier involvement in politics, he is to be the Deputy Prime Minister as well as Development Minister. What should we think about that?

I understand that he was nominated in order to be prepared for more important roles after the reformation of economic departments. From this point of view his nomination is a positive step, just like in case of Mariusza Błaszczak’s nomination. Błaszczak seems to have been preparing to his role as the MSW (the Ministry of the Interior) chairman.

Jarosław Gowin’s situation is more interesting.He was supposed to head MON (Ministry of National Defense), but he chose the department of higher education in the end.

Let’s not forget that the Law and Justice Party’s program for that department is completely different from the one Civic Platform had in place. Gowin will have to show superior skills in this matter. I think that this government’s goal is to audit and transform the state institutions. Beata Szydło’s ministers will prepare the ground for a government that will follow and which will implement the most important, strategic changes.

Do you expect a different government, or rather a shift of responsibilities and functions? Do you think that Szydło will be replaced by another Prime Minister?

Jarosław Kaczyński has already clearly indicated and warned his party’s members that any of them could be dismissed if they fail to manage their departments properly. The Law and Justice Party Chairman stated that he would not allow any rebellion, fights or any bias. Radicalism of the opposition demonstrates the context of his statement. The politics within individual ministries will partially derive from what the previous government left behind. The next few months will be the make or break time. We will see who copes with their strategic challenges within individual departments. I can’t imagine that anybody is wondering right now whether the next government is under Beata Szydło’s administration or not. It is too early for this sort of speculations.