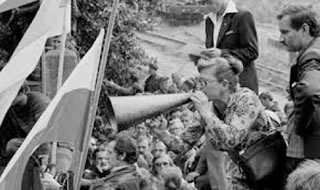 The Institute of National Remembrance (IPN) sent to the court indictment in a case concerning communist crimes and crimes against humanity, committed against Anna Walentynowicz. The documents alleged an attempt to poison the legendary opposition leader (Founding Mother of the Solidarity Movement).

The prosecutor from the Warsaw Division of the Commission for the Prosecution of Crimes against the Polish Nation prepared this indictment based on the materials that were excluded from the investigation in the case of criminal enterprise operating within the structures of the Ministry of Interior (MSW). The indictment submitted to the District Court in Radom is issued against Tadeusz G. and Marek, J. K. - officers of the Third Department from Division IIIA MSW and Wieslaw A. S., Division IIIA KW MO officer in in Radom.

The defendants are accused of having committed, during the period from 19 to 21 October 1981, communist crimes and crimes against humanity involving violation of duties and exceeding official capacity in connection with the development and implementation of the operational multifaceted action aimed directly at the deceitful application of a pharmaceutical called “Furosemidum” to the "Solidarity" activist, Anna Walentynowicz, through secret collaborator who uses a pseudonym "Karol."

The purpose of the measure was to provide at least reduced mobility of Anna Walentynowicz and prevent her from meeting with workers in the industrial plants. The defendants acted to the detriment of the opposition leader, exposing her to the immediate danger of serious bodily harm or loss of life.

The alleged offenses carry penalties of imprisonment up to five years.
Source: Niezalezna