We’ve been waiting for you for a long time! Defense Minister evokes the Tbilisi warning of the late President Lech Kaczynski 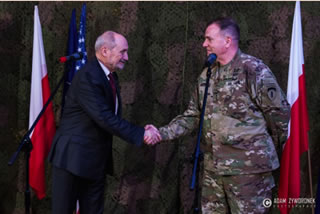 Today, as we greet American troops arriving into Poland, it is worth to revisit the words of great significance spoken by late President Lech Kaczynski at a 2008 rally in Tbilisi, the capital of Georgia, then under siege from Russia - said Minister of Defense Antoni Macierewicz in Zagan at the January 14, 2017 ceremony welcoming US soldiers to Poland.

A ceremonial welcome of US troops coming to Poland took place in the city of Zagan with the participation of Prime Minister Beata Szydło and Defense Minister Antoni Macierewicz. The American troops arrive in Poland to strengthen the eastern flank of NATO.

“Today we need to remind the whole world the prophetic words spoken by late President Lech Kaczynski at the August 2008 rally in Tbilisi, the Georgian capital, then under siege by Russia. He warned us then: "If we do not oppose this aggression now, then later a turn will come for Ukraine, later for the Baltic states, and perhaps later for my country and the whole of Europe." See Lech Kaczynski's Tbilisi Speech Here

He poused and added: "Unfortunately, we did not have to wait long to see his wise premonition, based on his great knowledge of history and its dangers, actually come true in front of our eyes."

On April 10, 2010, President Lech Kaczynski, a large part of the Central Command of the Polish Armed Forces and the Polish patriotic elite met the untimely death in the air crash in Smolensk, Russia. Next, the world witnessed the annexation of Crimea, an attack on Ukraine, downing of the flight MH17, and cyberattacks on Baltic States. See Smolensk Crash News Digest Here

“That's why you - the American soldiers - are so far from Fort Carson to defend freedom, peace in Europe and in the world. While you are here – the Polish troops are in Afghanistan, Kuwait and Iraq. The Polish ships sail the Mediterranean Sea to defend the southern flank of NATO against any aggression. Because together, we defend the independence of the eastern flank of NATO and the independence of the whole Europe,” said the Minister of Defense.

“Today we can say on behalf of the Polish people: We are together, we are safe, we are proud of the collaborative effort, which guarantees the security of the whole Europe, including the eastern flank of NATO. Thank you for that,” said Minister Macierewicz.