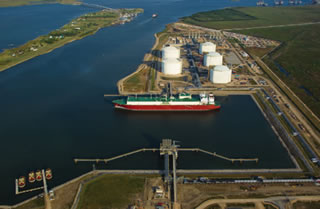 The 289 meters long and 46 meters wide tanker left terminal Sabine Pass in Louisiana on May 22 and has just arrived at the Lech Kaczyński Terminal in Świnoujście. The unloading took 24 hours. The liquefied gas will need to go through the process of regasification, which means its temperature will be converted back to natural gas at atmospheric temperature. This process takes place in vaporizers. Once the process is concluded, the gas will be transferred to the Polish gas network.

When back in April 2017, Polish Petroleum and Gas Mining (PGNiG) announced it signed a short-term contract with the American LNG leader, Cheniere Energy, the press, market experts, and politicians spoke about a “historic” significance of this contract, not only for PGNiG, but also for Poland. The opportunity for gas supply from America will strengthen Poland’s position in the talks with our current supplier, the Russian Gazprom.

“The agreement for LNG supply to Świnoujście is a break through. For the first time, American gas is a contender in this part of Europe,” stated Michał Kurtyka, Deputy Minister in the Energy Ministry, when talking to Polish Press Agency (PAP).

Grzegorz Małecki, the former chief of Intelligence Agency and the expert of Kazimierz Pułaski Foundation, emphasized that the contract for LNG supply to Poland from the U.S. is crucial for Poland’s energy security and the security of the Polish state.

At the same time, the Biznes chief editor Alert Wojciech Jakóbik pointed out that the contract will put Poland in a stronger position when negotiating the Yamal contract with Gazprom in 2019.

“Apart from the Norwegian gas coming through the Norwegian channel, the American LNG will become a source of real diversification, which will not only bring an end to the contract with Gazprom, but also provide an alternative source and a choice between the Norwegian and American gas,” said Jakóbik.

The short-term contract with Texan Cheniere Energy was the first one signed by a London trade office of PGNiG, which was established in February 2017.

“Traders from the London Office spotted an opportunity for a transaction and grabbed it,” Piotr Woźniak, the Chairman of PGNiG said at the end of April.

The Clean Ocean’s cargo is the very first supply of American gas, not only to Poland, but to the Northern Europe. So far, the American LNG was delivered only to South Europe, including Spain and Turkey. In Woźniak’s opinion, the contract proves that Poland became a gate for American LNG to get through to Central and Eastern Europe’s markets.

The Deputy Chairman of PGNiG for trade Maciej Woźniak said that the terminal in Świnoujście makes the delivery of American gas possible not only to Poland, but also to other states in the region. “We are proving that American gas can be delivered to this part of Europe, and that the terminal in Świnoujście can be used to deliver it to other countries in the region, in particular to those situated south and east of Poland, including Ukraine.”