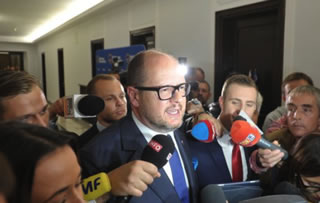 The murder of Gdansk Mayor Pawel Adamowicz at the WOSP charity concert on January 13, 2019, was widely reported by the international mainstream media as a political murder by a right-wing mentally ill criminal.

Based on this unverified assumption, media concluded that the perpetrator was inspired to commit this spectacular barbaric act by a hate campaign conducted by the ruling right-wing coalition against the left-wing opposition.

Such spin intends to reinforce the message that right-wing parties have inherent propensity for hate that leads to murder. The assassination of Adamowicz became the springboard to a massive media campaign to shame, censor and impede any criticism of the left. Taking advantage of this tragedy, the Polish opposition unleashed an insane crusade against “hate speech” of the right, thereby pushing left-wing political correctness censorship on the Polish society.

The prominent Politico reported that “the mayor had been subjected to barrages of abuse from pro-government media and other right-wingers.” The left-wing media took advantage of this tragedy to attack “right wingers” for hate speech that supposedly led to this murder. However, such spin of left-wingers ignores and omits key facts related to this murder like the role the victim played in Polish politics, thereby fundamentally distorts this important story and clouds the public understanding of the real developments.

.
In recent local elections that took place in November 2018, the Polish leading opposition party Civic Platform nominated and supported Jaroslaw Walesa against Pawel Adamowicz in the battle for the position of Gdansk mayor. In fact, it was the Civic Platform allied with Donald Tusk that in 2018 elections conducted a brutal political campaign against long-time ally, Mayor of Gdansk Pawel Adamowicz.

Considering that Adamowicz was one of the co-founders and key players in Civic Platform for years, the fact that Civic Platform nominated Walesa Junior against Adamowicz in recent elections is critical in evaluating this murder.

Adamowicz was involved in many scandals, tax fraud, and questionable real estate deals. However, due to his unmatched influence in the region, he remained beyond the reach of justice system and won 2018 reelections in landslide, thereby strenghtening further his position in this key region of Poland.

As many observe, the brutal elimination of Adamowicz from the political scene in Tusk’s bastion i.e. the city of Gdansk, is the blessing for the Polish opposition led by Donald Tusk and Civic Platform. The left not only gained their martyr to incite the masses but also several major corruption investigations into questionable business practices involving Adamowicz and Tusk lost the key witness.

Adamowicz will speak no more. And that is the blessing for Donald Tusk. His impunity continues and his political ambitions only grow. As the Politico put it: “Poland's largely pro-EU liberal wing looks to Donald Tusk, a former prime minister and current president of the European Council, as a possible leader to snatch back power from PiS in this year’s parliamentary election and next year’s presidential vote.”

One more observation is in order in connection with the vicious murder of the mayor of Gdansk. The special role Adamowicz played in the Polish politics, the context of the murder i.e. selection of the highly political WOSP concert, and the methode of the murder, i.e. professional stabbing committed in daylight, on television, with the victory speech broadcast live to millions of spectators, assure this heinous murder a spectacular, deeply shocking symbolism.

A very powerful symbolism was also associated with the Smolensk tragedy of 2010, in which the President of Poland and the top leadership of Poland were eliminated. Therefore, a question is in order whether those who planned the Smolensk assassination but have not been brought to justice to this day continue to pursue their evil goals, boldly leaving their footprints with full impunity?

The time will tell whether the horrific murder of Gdansk mayor was a false flag operation carried out in this symbolic city of Gdansk against the ruling PIS coalition in yet another dramatic struggle for power and domination in Europe and beyond. In the meantime, a question about journalistic ethics in mainstream media is in order.