OPEN LETTER TO ALL PEOPLE OF GOOD WILL 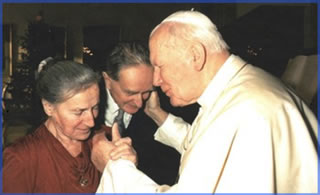 Beginning with 2011, the month of April - by the decision of the Senate of the Republic of Poland - is dedicated as the month of remembrance of the victims of German Nazi concentration camp Ravensbrück. This death camp was liberated at the end of April 1945.

April is the month in which 13 Polish women from the transport of September 22, 1941 were executed in Ravensbrück. Among them were young girls, just scouts. They were shot to death on April 18, 1942 in a narrow road between the bunker and the camp wall called Tottengang because at that time there was not yet a gas chamber and crematorium built in the camp. At the place of their murder we were able to place a commemorative plaque in 1997. While vising Berlin Pope Paul John II consecrated this plaque. Unfortunately, this commemorative plaque was later demolished and on the camp wall national plaques dedicated to all prisoners were installed. We have our place there too. However, for the memory of the Polish people this narrow road on which the Polish blood of executed girls was spilled on April 18, 1942 represents a very special place.

Only now, after over 70 years, talks about what happened in the Ravensbrück concentration camp begin. Only now people begin to dig into the fate of women imprisoned there and pseudo- medical experiments carried out on the Polish woman from the Warsaw-Lublin transport. Finally, the young people show interest in the history of Ravensbrück as a result of competitions organized on this subject. Now, when the Polish youth visits the former camp to commemorate the prisoners and becomes aware of what happened there suddenly some voices are being raised that this is Polish nationalism that wants to hijack the memory of Ravensbrück.

Patriotism is not nationalism! The memory of this camp is alive the most in our country because among 132 thousand prisoners there were 40,000 Polish women. These women were not from street round-ups, but primarily political prisoners, detained for underground activity, affiliation with the Home Army. Also women with a death sentence were deported to Ravensbrück. The Polish women in Ravensbrück were conscious patriots who fought to defend their country. For many years we were not allowed to even mention it. But we must never forget about them.

At the beginning of 1945, we learned that on January 5 the women subjected to pseudomedical atrocious experiments, called "experimental rabbits," would be executed. So, we wrote our testament. We requested that international schools be established in Europe in order to raise the next generations in understanding of the value of humanity to prevent wars and criminal experimentations such as the ones carried out on us in Ravensbrück. We wanted to make sure that what had happened to us would never happen again.

No one is born a saint or a criminal, humanity must be developed. Over the years, I have been dealing with youth and communicate to them the truth of the war. It is my goal to make sure that they be humane people, because in my life I met inhuman men and inhuman women. The war ended, but its effects are still with us. The most terrifying of these effects is the degrading of the value of human life, what we see in the dramas of abortion and euthanasia.

I will repeat again: Patriotism is not nationalism because it is not about imposing my patriotism on others. It's not politics. It's searching for your own identity. That's why we have to preserve the memory of what happened, so that we are able to stand on the side of good and beauty, not evil and hatred.

For more information on this subject see: Skandal w Ravensbruck