Wałęsa did not jump the fence!
He was brought to Gdansk Shipyard by military boat! 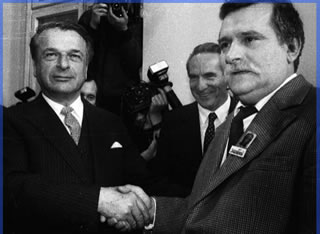 “Walesa was to go on strike, but he did not,” said Walentynowicz on a video. “He arrived by motorboat later. Instead of going on strike, he went to the Navy Commander in Gdynia,” said the opposition activist, Solidarity legend Anna Walentynowicz in 1995. Her statement can be found in the video below.

“This is a disgrace! I am ashamed of you. We fought so beautifully, we achieved such success. And what did you do with it? That jerk gave me a lift?” Walesa replied then.

In 2003, at the conference on the 25th anniversary of the establishment of “Solidarity” Free Trade Unions, Walentynowicz stated that it was confirmed by the former secretary of the Regional Committee of the Communist Party in Gdańsk, Tadeusz Fiszbach, that Walesa was brought to the Gdansk Shipyard by communist secret service.

According to Walentynowicz, Lech Walesa compromised and betrayed Free Trade Unions. At one point someone shouted to him: "Lech, don't sign (this agreement), because there is a chance to legalize Free Trade Unions. In response Walęsa said: "You are stupid. The director gave us more than we demanded,” reported Walentynowicz. Lech Walesa has repeatedly denied her version of events.

Walentynowicz was killed in the 2010 crash of the Polish Air Force One in Smolensk, Russia. According to her family, her body has not been found to this day.

A version of events presented by Anna Walentynowicz was confirmed by tapes disclosed in 2020 by TVP.info on which former Prime Minister Leszek Miller in conversation with Jan Kulczyk provided the key information about the past of Lech Wałęsa.

“One thing is not real. Lech, unfortunately, did not jump over any fence. He says he went through a side gate, but the late Navy Commander told me that they really brought him in,” the former communist Prime Minister Miller revealed, emphasizing he was sure of this information.

To this revelation replied one of the Polish journalists Piotr Semka on Twitter. If this were true, it would explain the speedy promotion of Admiral Piotr Kołodziejczyk to the position of the Ministry of National Defense in 1990. According to the rumors of that time, Kołodziejczyk had a lot to do with the cruise of a motorboat in August 1980. On September 5, 1980, Kołodziejczyk received a major promotion.

In a conversation with Kulczyk that was just publicized in Poland, Miller made other startling statements as well. According to him, Andrzej Wajda's film entitled "Wałęsa - Man of Hope” was to serve political purpose to strengthen the position of Lech Wałęsa and make him more believable in the attacks on Jarosław Kaczynski.

“Now, Wałęsa just needs [to be directed] to say at the right moment that these ducks, this duck [reference to Jaroslaw Kaczynski], is a misfortune for Poland,” says Kulczyk.

“Now you need to control this message, so that what he says goes everyday in all newspapers, on the first page, because after this film the climate around Wałęsa will improve, you'll see - the millionaire assured the former Prime Minister Leszek Miller.

Kulczyk also told Miller in a conversation at Sobańscy's palace that he convinced the movie director Wajda to change the final scene of the film because it was supposed to look bad.

- And listen, this is how this film ends, that there is this standing ovation, there is Walesa speaking in this Congress, this (US) Congress stands up, and at this very moment the camera leaves the television screen in which it was happening, and zooms in on the two SBs (communist agents) standing, with whom (Walesa) signed his loyalty agreement 20 years earlier. [The agents say]: “and we will get him again,” relates Kulczyk.


- And I said [to Wajda]: “Andrzej, this is the stupidest ending that there could be that SB [communists] win, because then it makes sense what the entire PiS is talking about right now: they got him because there was something to get him for,” argued Kulczyk.

Ultimately, as the viewers could see, the Kulczyk arguments "reached" Andrzej Wajda and the last scene of the film was changed.