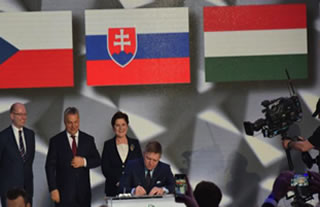 “The cooperation between the states forming the Visegrad Group is the closest and most effective within the European Union, and it has become an international brand,” Peter Szijjarto, Foreign Affairs Minister of Hungary, told Radio Kossuth.

Szijjarto claims that the Visegrad Group managed to maintain its position of significance for the last several years thanks to its reasonable policy, based on a common sense, and proved that its rational economic policy can stimulate growth, and that it has succeeded in stopping the wave of migration.

Szijjarto says that Brussels threatens to punish the states of Visegrad Group for refusing to partake in the refugee relocation program, rather than thoroughly consider how to restore security within the European Union.

The Foreign Affairs Minister of Hungary said it was untrue that the states of the Central Europe don’t sympathize with other states. He stressed that it is exactly the opposite, and not agreeing for illegal immigrants to enter Europe is a sign of solidarity.

Szijjarto thinks that Europe faces the most serious terroristic threat in its entire history, and he appealed to Hungarian citizens to be careful when travelling and to register with Hungarian consulates abroad.

Hungary is about to take over the leadership of the Visegrad Group after Poland. Back in April 2017, Szijjarto announced that, while in lead, Hungarian priorities will focus on creating transport and energy links between the Central and Eastern Europe, as well encouraging the E.U. member states in the region to comply with the European standards for energetic security.

The Visegrad Group is an informal, regional allinace between four states of the Central Europe: Poland, Czech, Slovakia and Hungary. The Group was established on February 15, 1991, and the states take the lead of the Group in turns for one year.