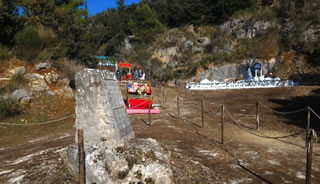 At Monte Cassino, in Italy, where the Polish soldiers fought valiantly and shed their blood during World War II, an unacceptable event is unfolding. The terrain of the battle site of Monte Cassino has been leased by a private, commercial company, for activity that offend the nature of these sacred grounds. At the end of November / early December 2015 a commercial area has been opened on these grounds, with entrance fees, to a “St. Nicholas Village.”

In order to build this site, the surrounding natural environment has been destroyed with tress cut down and earth-moving equipment ran its course on the grounds of this former battlefield. The old quarry, from which stone material had been quarried for the construction of the Polish War Cemetery has been completely destroyed, and a stone plaque dedicated by the 2nd Polish Corps in 1945 was almost destroyed. The newly formed "village" in effect has prevented access to monuments erected for the 4th Armored Division "Skorpion" and the 5th Borderland Infantry Division.

We know that the Polish Embassy in Rome had sent letters to the Abbey of Monte Cassino and other institutions concerned requesting an explanation. In the town of Cassino, this initiative caused great consternation, and many Italians considered this recent act inappropriate and a desecration of the memory of the soldiers fighting in this battle. Local historical and community organizations have also conducted a number of protests. On Sunday, December 6th, 2015 a sit-in protest was organized on the square in front of the Polish Cemetery.

As a result of many letters and complaints to the local authorities, some of the structural elements of the village have been sequestered, and subsequently dismantled, because, as it turned out, they were constructed without the required permits. On the website "Dal Volturno a Cassino" a petition was posted to the President of the Lazio region, Nicolas Zingaretti, asking him to stop this shameful, commercial initiative.

It is very important for us that we, the Poles, in a determined manner express our opposition! This is all the more important that, as we have learned from the Italian press, the area covering the battlegrounds of Monte Cassino, has been leased to the commercial firm for a period of 20 years, for the amount of 50,000 euros per year.

This project is an insult to the memory of those soldiers who met their death and fought at the Battle of Monte Cassino!  This commercial initiative compromises the historic seriousness of the place and is disrespectful to the memory of those who sacrificed their lives for our freedom and are held in high esteem by Poles and Italians alike for over 70 years.