Prime Minister Szydło about KOD protests: “They are organized by those who are no longer in power and who lost their privileges and connections.” 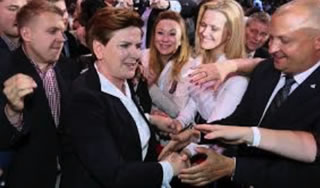 “Today, when the Parliament discusses changes in order to improve the law, people organize protests and claim there is no freedom in Poland,” said Beata Szydło in the special edition of Kawa Na Ławę on TVN24.

Talking to Bogdan Rymanowski, Prime Minister Szydło referred to the KOD (Committee for Defense of Democracy) manifestation. “I would like all protesters to think whether their protests relate to the reality we all live in. Have they had their personal freedom in any way restricted during the last few weeks? My opinion is that at the moment there is a certain agenda being pushed through to make the Polish public think that outrageous attempts to suppress democracy and freedom are being made. However, a calm analysis of the situation demonstrates that this is the doing of a single group of people, who are no longer in power following a democratic election. The Polish people no longer want the previous government, which did not care about people’s problems for the past eight years, which repressed people’s protests with the police forces, as it was the case with respect to the miners from Jastrzębie or a young internet user arrested for criticizing the government.

Beata Szydło stated that PiS (Law and Justice Party) does not intend to suppress anti-government protests with police force. She also pointed out who are the leaders of the protests. “These protests are organized by those who are no longer in power and who lost their privileges and connections. (…) Please note that the demonstrations are organized by political parties, and they’re led by the PO (Polish Civic Platform Party) politicians, such as Ryszard Petru, who defends the interests of finance groups. However, Petru did not protest when funds from OFE (Polish Open Pension Fund) were stolen from the Polish citizens.”

Prime Minister Szydło emphasized that unity has to be built in Poland. However, she stressed that in recent aggressive protests “the democratically elected government is questioned and subjected to attacks.”

The Prime Minister also spoke about the Polish Constitutional Tribunal. “The changes that PiS proposed for the TK are not unreasonable. The reason for them is the violation of law committed by the predecessor government of PO and acquiesced to by the Tribunal. We could not accept or ignore such a state of affairs. We had to amend the law,” said Szydło, adding that it was not PiS that violated the law.

When asked about Tribunal’s Chairman Rzepliński, she stated: “I would like to believe in Mr Rzepliński’s intentions and his lack of bias. However, I struggle to accept that the Chairman would manifest his views in such an ostentatious manner.” She quoted Chairman’s statement about him leaning towards the ideas of the Civic Platform (former governing party). “A chairman of the Tribunal should not voice such opinions, because they contradict his impartiality and question his credibility,” Szydło noted. “His opinions are not reliable anymore and I am truly sorry to say that. I want to believe that his views are not politically motivated, but chairman Rzepliński did not react when the Civic Platform openly violated the Polish Constitution; clearly his loyalty still lies with that party. Every person holding a public office should comport him or herself according to the prestige of that office.”

Beata Szydło also talked about pending amendments to the bill governing the Constitutional Tribunal. “The best way for opposition leader Ryszard Petru and PO politicians to prove that they mean well is to join the Sejm process and seriously consider this bill. This is the only way for them to prove that they genuinely mean to solve a problem and not just to harm the government.”

When asked about the results of the Millward Brown poll, which showed that half of Polish citizens are critical towards the PiS performance, she replied: “In the Polish political culture there is a rule of “100 days” that allows the new government to smoothly introduce its policies. This rule was not applied this time, when PiS won the election. For the last eight years, PiS was consistently attacked and vilified. The most important poll is the electoral poll, which showed majority of votes went to PiS. Right now I am focused on keeping promises I made in my electoral campaign. The Polish people put their trust in me and I will not let them down. I will be consistently on their side and not on the side of those who are no longer in power and who just want their privileges back.”

The Prime Minister also commented on the so-called “raid” on the NATO counterintelligence center. “This is a classic case of a storm in a teacup. The time of the event, 1.30am, has been emphasized. (…) It would be only fair if Mr. Grupiński and Siemoniak (former Civic Platform officials) explain the reasons why this change had to take place.”

Talking about the “500+” project (support for families), she said: “The project is under consultation and I will happily talk about it with (opposition leaders) Mr. Petru, Neumann, or Siemoniak. So far, Petru merely criticized the project saying it was unnecessary.”

The Prime Minister hopes that the initial payments to families with children will be paid out according to the “500+” project in April 2016.