The epic story of the Polish anti-communist resistance 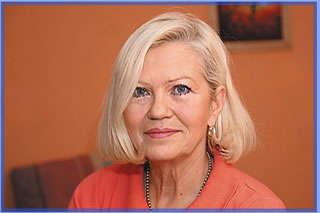 After the Yalta agreement in which Roosevelt and Churchill betrayed their Polish ally by delivering the mutilated Poland to Stalin, the Polish people fiercely resisted the incoming Soviet occupation of their country. The story of the Polish resistance to the Soviet rule in post WWII Poland has not been told to the world to this day. But this enormous tragedy that befell the Polish people after the war has a direct impact on the political landscape of present-day Poland.

The enormity of this tragedy that befell Poland at the end of WWII and its present day significance is well illustrated by the story of Magdalena Zarzycka-Redwan, who serves as President of the Association of Children of anti-communist Resistance. Soldiers of the Polish anti-communist underground are known in Poland as “doomed solders” or “cursed soldiers” because they fought for independent Poland against all odds, in the circumstance that left them with no chance for victory, with no hope for liberty.

Today the daughter of "doomed soldiers" sues for 15 million PLZ in compensation - one million for each year spent in the Stalinist prison and later in the Stalinist orphanage. This is the first such case in Poland.

– This trauma, what we experienced as children of "cursed soldiers" is impossible to tell. Most of us do not even want to talk about it. I understand it. I decided, however, to come forward as first, says Magdalena Zarzycka-Redwan, President of the Association of Children of the Cursed Soldiers.

Many victims of communist oppression were unsuccessful in seeking reparation for traumatic childhood since the beginning of 1990-ties. The courts staffed with former communists have ruled that no legal basis existed for the payment of such compensation. New opportunities opened up only recently when the new law was introduced that rendered as null and void judgments in cases related to communist repression for activities in defense of independent Poland.

Pregnancy was not protection against torture

-I spent more than two years in prison in the Lublin Castle and another thirteen years in Stalinist orphanage. This is a just compensation for all this injury - says Magdalena Zarzycka-Redwan.

-I do not know how the Court will approach this case, but for me it is very important that this matter is finally before the Court. I want to pursue this case to set an example for all other children of "cursed soldiers," who are neglected and forgotten. They approach this initiative with caution and await the outcome of my case. I want to see what we can win.

Magdalena Zarzycka-Redwan was born in May 1949 in the infamous prison of the Ministry of Public Security at the Lublin Castle. It was there in the Prison. Her mother, Stefania, died immediately after giving birth. Her father, Wladyslaw, in turn was sentenced to 15 years in prison. He regained his freedom after Stalin’s death in 1956.

Zarzycki family lived near Lublin, in the village of Kolonia Luszczów. Their house located on the outskirts of the village and surrounded by forest provided good location for conspiracy. Both parents were active in the resistance organization “Freedom and Independence” (WiN). Władysław organized arms and money for the WIN operations. Stefania smuggled bullets from Lublin. Commanders of the WiN detachments often met in the Zarzycki house. One of their soldiers nicknamed "Highlander” betrayed the organization and reported them to the communist regime." During the ambush WiN commander fled, but Zarzycki family was arrested.

Stefania and Władysław left three children at home. At the time of the arrest Stefania was in advanced pregnancy. But being pregnant did not protect her from being tortured. After one of the torturous interrogations Stefania gave birth to Magdalene, dying fifty minutes later.

For more than two years, the baby girl Magdalena was cared for by other female prisoners from anti-communist resistance. In 1951 Magdalena Zarzycka was transferred from prison to orphanage. Five years later, when an amnesty was issued, her father was released from prison.

Upon his release from prison, Władysław Zarzycki attempted to recover his property confiscated by the communists. In 1963, after one of the court hearings to reclaim his property, he died of a heart attack. Upon his death, Magdalena was sent back to the orphanage, where she was labeled a "bandit’s daughter." Over the years, she had to hide the truth about her origins and the fate of her parents. After the fall of communism, she began to explore her family history. She also succeeded in achieving judicial rehabilitation of her father. Source: